From StrategyWiki, the video game walkthrough and strategy guide wiki
(Redirected from Penguin Wars)
Jump to navigation Jump to search 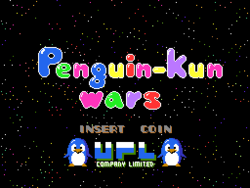 Penguin-Kun Wars was an amusing action game developed by UPL for the arcades. It pit a Penguin against a variety of animals in a shoot-out of sorts that combined Dodge Ball, Pong, and Billiards. Each player stood on one side of a table, starting out with five balls and sixty seconds on the timer. The goal was to get every ball on your opponent's side of the table, or be the player with the least balls on their side after sixty seconds. Of course, if you got in the way as a ball was about to land on your side, you would be knocked down for a number of precious seconds, giving your opponent plenty of opportunity to load your side up with more balls.

The game isn't extraordinarily unique, but its playful presentation, and near frantic pace made it quite fun and enjoyable to play. The game was ported to the Famicom, MSX, and the FM-7 computer system. It was later ported to the Game Boy with a two-player head-to-head option that was missing from the original game. Outside of Japan, this version was known as Penguin Wars in the United States, and King of the Zoo in Europe (which was published by Nintendo of Europe). A sequel known as "Penguin Wars 2" was based around the same basic game, but included an overworld map and a variety of new opponents in a host of new venues. It was only published for the MSX.

Penguin: At all times, you control the Penguin against a host of other mammal opponents. You have to ability to pick up one ball at a time, and throw it to the other side of the table. If your ball hits another ball along the way, they will bounce off one another, and one will most likely be reflected back at you. If any ball hits you when it arrives at your edge of the table, you will become stunned for a couple of seconds, unable to stand up and throw any balls. You can nudge yourself to the left or to the right while you are stunned, but if you are hit again, you will become stunned for additional time. You can also stun your opponents if you manage to hit them with a ball, and you can keep them knocked down if you continue to hit them with more balls. 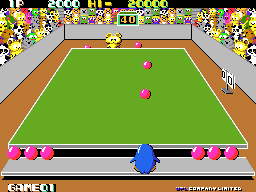 Among the animals, a Thundster from Ninjakun can be seen in the crowd.

There are three different types of Bonus Rounds which can occur between tournament matches:

Here are some images of home conversions of Penguin-Kun Wars.