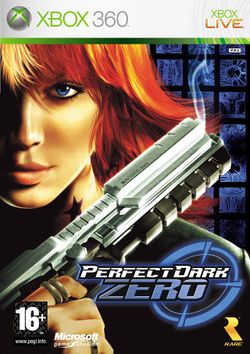 Perfect Dark Zero is a first-person shooter video game developed by Rare and published by Microsoft exclusively for the Xbox 360 video game console. It was released as a launch title in North America, Europe, Australia and Japan.

With respect to storyline, Perfect Dark Zero is a prequel to the successful Nintendo 64 game Perfect Dark, released in 2000. Zero takes place in the year 2020, pre-dating the original Perfect Dark's storyline by three years.

The story is set in 2020, three years prior to the events of the original game. Joanna Dark is a bounty hunter working with her father Jack and her friend Chandra. On Joanna's first mission, they rescue a scientist named Zeigler from the hands of a Triad crime lord: Killian. Zeigler uses a neurodrive to implant information into Jack's mind. Jack gets captured by dataDyne and Jo rescues him only for Jack to die at the hands of Mai-Hem whose father, Zhang Li, is the founder of the corporation. Jo is then sent on a mission to find Dr. Eustace Caroll, who then uses the same neurodrive technology to extract any memory of the words her father said concerning Ziegler's secrets. Dr. Caroll is then killed by Chandra, who is secretly working for Zhang Li. Jo joins the Carrington Institute and infiltrates a mining operation in an ancient Peruvian Temple where she discovers the conspiracy.

Zhang Li and Mai-Hem are searching for an ancient artefact known as The Graal, which imbues its possessor with superhuman powers. Traveling to Africa, Jo rescues prisoners including Jonathan and several other Carrington boys, before running into Mai-Hem again. Jo avenges her father's death and kills Mai-Hem and the party is air-lifted out. The Carrington Institute plans an offensive on dataDyne forces with the battle taking place on a large bridge. Jo infiltrates an arena and faces off against Zhang Li after he dispatches Chandra. Defeating the seemingly invincible power-hungry genius, Jo is met by Jonathan and Daniel Carrington. When Jo asks, "How did I do, Boss?" Carrington replies: "Perfect."