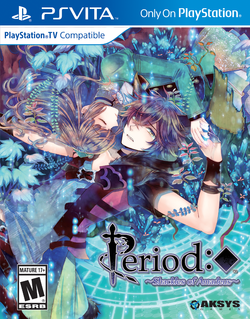 Period: Cube - Shackles of Amadeus (ピリオドキューブ - 鳥籠のアマデウス, Period Cube - Torikago no Amadeus?), stylized as Period:Cube ~Shackles of Amadeus~, is an otome visual novel developed by Otomate, a subsidiary of Idea Factory that produces otome games targeted toward girls. Like most otome games, players take the role of a female protagonist and make choices that lead toward branching paths, each focused on building a romantic relationship with a male character. Originally based off of a drama CD series of the same name, Period: Cube was published by Idea Factory in Japan on May 19, 2016. It was localized by Aksys Games a year later, released in North America on April 28, 2017 and in Europe on the same day.

Period: Cube's scenario is based on the isekai (異世界, lit. "different world") trope that became particularly popular in Japanese media of the 2010s. In isekai, an ordinary protagonist will usually end up trapped in a parallel universe, sometimes virtual in nature. It is this different world that presents the conflict in Period: Cube, as the protagonist, ordinary high school student Kazuha Hanamiya, ventures into a mysterious server of a popular MMO game in search of her missing brother.

Arcadia is an MMO that has become increasingly popular with the nation's youth, but there have been mysterious occurrences lately that seem to be related in some way to players of the game. While the game has twenty-five servers that correspond to the letters of the alphabet (with the exception of V), there have been rumors of a World V server that would otherwise appear to be nonexistent. Perhaps connected to this server is the string of gamers falling into idiopathic comas, some of which prove to be fatal. In the midst of this mystery is Shiki Hanamiya, the older brother of protagonist Kazuha Hanamiya, who disappeared after giving childhood friend Hiroya Tachibana an ominous warning: stay away from World V. With no other leads, Kazuha and Hiroya decide to investigate the MMO, and soon find themselves trapped in an alternate universe with a dangerous set of rules.