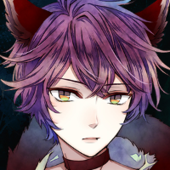 A brusque Boxer with a slight attitude, who often tends to be harsh with Kazuha. Though he can sometimes come off as aloof, he is actually a caring person who puts his life on the line for Kazuha in the game world. In real life, he is her childhood friend. Although they played together for years as children, after graduating from junior high, they eventually grew apart. He has been acting distant around her lately for some reason. He is also a good friend of Kazuha's brother, Shiki, who was the one who invited Hiroya to play Arcadia in the first place. He helps Kazuha find her brother, while at the same time protecting her after she becomes the "Almighty."

Though Hiroya is the first bachelor you meet, it is recommended that his route be played later than some of the other characters', as some important plot details are revealed here. Demento's final CG can be found in this route.