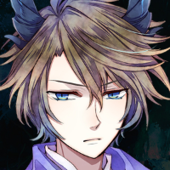 A solitary Dracon Fencer who’s not too fond of lies or jokes in general. He is very straightforward with his opinions, and comes off as rude to the people around him. He is aware of his obvious skill as a swordsman and looks down on Kazuha for not having any power, despite her position as the "Almighty," and dismisses her as useless.

Radius is a tough guy with a soft interior, as seen upon his catastrophic first meeting with Kazuha. Along with his combat abilities which far exceed the average player's, his possession of the Shadow's Edge, one of the Trinity of Swords required to clear the game, has made him famous among fellow Demons. However, he prefers to avoid their company and quest alone, even when adventuring into the Ark, the most dangerous dungeon in the game. He seems to be traumatized by an event in his past, and is noticeably tight-lipped about his life in the real world.