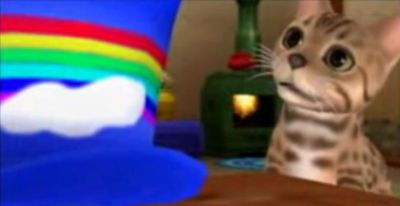 The beginning of Petz: Catz 2 (including choosing a breed and first two missions)

In Pawville, the town where you live, peace is kept by the Magic Hat. It is kept in the paws of your father, Arvin. He shows it to you and tells you that it was given to him by his father, your grandfather. He vowed to use it only for good. He has kept that vow with all of his ability, but there are rumors of evil creatures who would love to get their paws on the Magic Hat, and use it for evil. He is going to have to be on his guard and be more careful from now on. Your mother, Ione, tells you that they have a visitor.

Your friend Victor arrives and asks you to come and play. Once outside he asks you if you have heard of Ivlet. He tells you that Ivlet is an evil wolf, but he finally got caught. He is at the Police Station on this very island. You and Victor decide to go and see him. 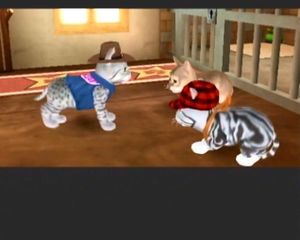 Ada isn't too happy to find two kids messing about in the Police Station.

At the Police Station, you creep up to the cage. Ivlet is asleep, but you don't notice him opening one eye. He closes it again when Ada, the Sheriff of Pawville, comes through the door and asks who is there. When she sees you and Victor, she tells you to go home. Ivlet is an evil wolf, and you must not go near him, and most of the time he sleeps during the day anyway. You and Victor go back outside again.

But Victor is obviously not scared of the Sheriff, and he says that you and him should go back tonight to see Ivlet up and moving around. Until then, he suggests that you play at Dolphin Coast.