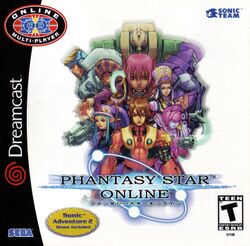 The Phantasy Star Online titles are a sub-series of Sega's Phantasy Star of games that began in 1987. The PSO games themselves are simple RPGs where the player slays monsters, levels up, buys new equipment, etc. The online Phantasy Stars differ from the previous games in the series by offering a real-time approach to combat rather than a turn-based one, and seamlessly integrating this with the exploration/plot development aspects of the game.