In the second town, it is rare to find a location with only one Kyonshi to defeat. Be prepared for multiple fights when you enter a new location, and keep your health up between sites by visiting the temple, which happens to be in the middle of town this time. Be sure to learn the Turn Kick move from the Training Hall, as its power will come in handy.

In order to obtain the Bell, you must allow the blue flame that travels up and down outside of the graveyard to touch and capture your assistant. Only then will the Sanshi appear in the second section. After you defeat it, the woman in the back will give you the bell. Two doors to the right, you will encounter a room containing a small immobile Kyonshi. This is Conshi, the baby Kyonshi that you can control if you have the bell. Equip the bell and squat in front of Conshi until it starts to move. Then when you leave the house, Conshi will be following you. It will fight in your place until it is defeated. However, fighting with Conshi is very difficult to do.

You can learn five different techniques here, and each technique costs 6 scrolls. Since each scroll providing location gives you four scrolls per visit, you will have to visit such locations 8 times in order to obtain enough scrolls to learn every move. 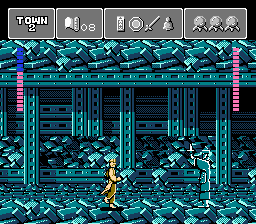 The boss of this stage is a fairly tall Kyonshi that likes to throw knives at you from a distance. When it's not hopping around, it will hold a knife up briefly before throwing it in your direction. Gravity pulls the knife down, so it doesn't travel straight through the air. If you're standing close to the boss, you can easily squat down and avoid getting struck by the knife. Wait until the knife is safely thrown over your head before standing up and resuming your attack. Assuming you learned the Turn Kick move, assault the boss with this powerful kick until it is defeated.