Some cities worship only a selection of the gods, and most cities have a 'patron god' which must be worshiped more than others and is harder to please. Gods are worshiped by building temples, shrines, and temple complexes. Temples dispatch priests to wander the city and spread the word of their particular god. Shrines are small monuments which have no staff but simply serve to appease those living near one. Temple Complexes may be built to any god, though they are usually only available for the Patron God. They are massive structures which greatly increase a god's activity in a particular city and grant the city special abilities. Temple complexes also can have altar and oracle additions, which pay homage to lesser gods.

In addition to temple-building, festivals may be thrown to specific gods to appease them. Happy gods will grant a city various special gifts or powers. If a god is angry, it may effect a disaster upon the city, relevant to the god's domain. Osiris, for example, will reduce the Nile flood, thus reducing agricultural yields. Seth will destroy troop forts, and Ra will lower a player's kingdom reputation.

While ancient Egypt had a sizeable pantheon of major gods and innumerable minor gods (down to "household gods" worshipped only by particular social groups, sometimes as small as individual families or towns), only five "major" and ten "minor" gods are featured in the game. Note: some of the gods listed as "minor" in Pharaoh were actually of comparable importance to that of the "major" gods in ancient Egypt. 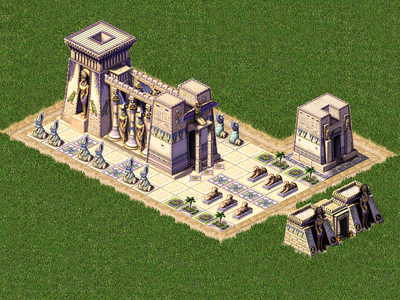 Worshipped throughout most of Egypt's history as the king of the gods and god of the Sun and "spiritual father" to the Pharaoh, in the game this god's role is the god of the Kingdom. Of the five major gods, Ra is the patron god in the greatest number of missions. Ra's blessings include a small rise in Kingdom rating, a large rise in Kingdom rating, an increase in trade limits (affects all potential trade partners regardless of whether the trade route is open or not and of amounts actually bought or sold, but does not automatically sell or buy any goods, open previously inactive routes, or make more trade routes available for opening), and a 12-month 50% boost to income from exports (calculated so that every 100 units/1 unit of "block" goods is sold for 150% of its list "sellers receive" price). Ra's set of blessings is probably the most powerful in the game, though the value of a blessing depends significantly on current circumstances when the blessing is received. 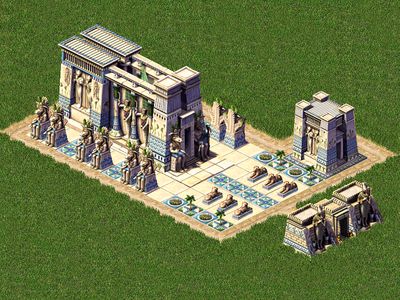 In ancient Egypt the god of the afterlife (along with Anubis, who was however usually portrayed as his "subordinate") and king of the dead, in Pharaoh Osiris is the god of agriculture and the Nile flood. He is usually patron god in missions heavily reliant on agriculture, more often in the early missions. Osiris's blessings include: a small improvement of the flood forecast, a large improvement of the flood forecast (both for the currently upcoming flood), and a double harvest on all floodplain farms (calculated as the yield harvested from each farm being multiplied by 2 upon spawning of the harvest delivery cart) effective at the harvest immediately after the blessing. While most gods' blessings are bonuses to usual gameplay, Osiris's blessings are in fact almost necessary for a consistent farming production in missions where irrigation ditches cannot be built. 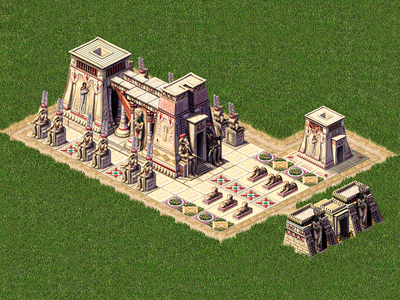 In Egyptian mythology the god who created man out of clay, in Pharaoh Ptah is the god of craftsmen and artisans, i.e. of industry. Ptah is patron god rather infrequently, in missions that require a sizeable industrial sector. His blessings include: increasing stocks of a random good (from a narrower selection of the more essential ones) in a random warehouse with free capacities to the maximum of those capacities (regardless of initial stock size)(note: it is currently unknown whether the selection of the good for this blessing when there is more than one eligible is random or based on a preference ladder (which could be sorted either in a fixed order of good types, by size of free capacities, or by a combination of these factors)), and setting stocks of raw materials in a fixed selection of city industries to full in any and all industries of the eligible types that exist in your city (road access is required for an industry to be affected, current number and availability of employees is irrelevant). 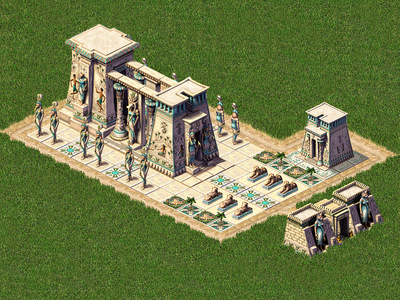 Both in the game and Egyptian mythology the goddess of home, the hearth, and (mythology only) cats, Bast is patron god in cities that are required to be very large and/or composed of high-level homes. Bast's blessings include: throwing a festival to all gods except herself (no cost, no preparation time, does not occur when player-initiated festival is "charging" (being planned) - another blessing chosen instead or blessing withheld until regular festival is over (unconfirmed which is the case), currently no confirmation whether and, if so, how mcuh festival affects city sentiment (which "regular" festivals do depending on festival type (not chosen god) and possibly (unconfirmed) time since last festival), and no confirmation whether this festival counts towards the limit on the number of festivals in any given 12 months), and increasing the stores of food and goods in all houses and bazaars in the city that have some (particulars currently unknown, but in houses the stocks of food and in bazaars of both food and goods can go into the thousands (tens of thousands for bazaars) through repeated iterations of this blessing).

This god is the one who will help a lot to keep the rest of the gods happy, especially if she is a Patron god. 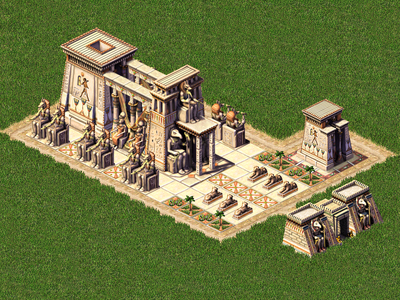 In both mythology and game the god of war and destruction, Seth is patron god the least often, in only a handful of missions where combat is essential (there may be more cases where Seth is the patron if the player consistently selects the "fighting" missions in the main body of the original Pharaoh game where two choices are available). His blessings include the vow to strike down any would-be invaders that come to your city (works only on land forces, when received several times with no attacks in between does not stack or carry over (i.e., the blessing is still performed only once and has to be received again after it has been depleted, thus the "redundant" blessings are automatically forfeit; this blessing appears again as a message when Seth fulfills his promise and slays the invaders, which happens after they have been in your city (i.e. present on the map) for a short (fixed) period of time, and instantly kills a fixed number of enemy troops, which may or may not be the entirety of the land invasion force; Seth can bless you again (if the regular appeasement requirement is met) while enemies are still in your city (if you are taking some time eliminating them), in that case, the same unlucky enemy force can be decimated twice by Seth; though the occurence is rare in actual gameplay by virtue of combat usually ending fast, Seth's repeated blessing can be your last chance if your forces are defeated and the enemy sets about pillaging your city), and the vow to protect your soldiers sent to battle elsewhere in the kingdom (again does not stack, works by improving the chances of your troops in the behind-the-scenes calculation of the outcome of combat abroad, works for all types of units). It is currently unknown whether the number of "forfeit" extra blessings you have received has any effect on the strength of the one blessing that is actually realized (for both types of Seth's blessings).