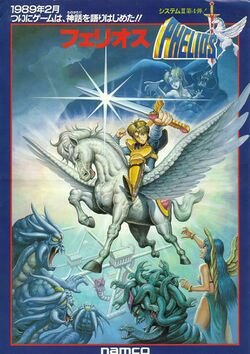 Phelios (フェリオス, literally Feriosu), is a vertical scrolling shooter arcade game that was released by Namco in 1988 only in Japan; it runs upon Namco System 2 hardware and was never released in the United States due to the "bondage/torture" scenes which were shown between each stage, and were similar to those from the new version of Namco's own Rolling Thunder. While no nudity is shown, the scenes were still somewhat "strong" to be shown in an arcade game during the early 16-bit era - and the game's score display also gives the illusion of allowing values that do not end in "0", like Hopping Mappy, Bakutotsu Kijūtei, and Metal Hawk did before it, but the smallest point value it can award to a player for killing an enemy is 10. Like all four older titles it used the Yamaha YM-2151 FM sound chip for its songs - but only like Metal Hawk, it used the C140 custom sound chip for its sound effects and speech (as opposed to PSG and DAC). It also ironically does not feature any Greek text whatsoever.

The game's plot is loosely based on Greek mythology, and also uses the familiar theme of saving the princess from evil; in this case, the princess is Artemis, Goddess of the Moon, and the evil is Typhon, one of the Titans (specifically, the one that Zeus dropped a mountain on). The character controlled by the player is Apollo, the God of the Sun, who must ride that legendary winged horse Pegasus through seven stages, in order to rescue Artemis - who is also depicted as his lover (even though in the myths they are actually twins), and defeat various other Greek mythological characters such as Medusa, the three Graeae, Siren, Antaeus, Scylla and Cerberus, while collecting various powerups along the way.