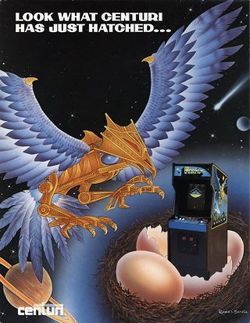 After Space Invaders and Galaxian proved that the vertical space shooter was a formula for financial success at the arcades, tons of arcade manufacturers raced to flood the market with similar products. A few of them were good, but most them were bad. Phoenix was one of the rare exceptions.

Phoenix features three different scenarios across five different stages. The first two stages have the player fighting against small space birds. The next two stages pit the player against much larger falcon-like birds. The final stage is the showdown against the mothership. In addition to firing upwards, the ship can also erect a temporary shield that destroys the birds.

While Phoenix stood out in a crowd, it was still part of a big crowd that began to look less attractive when Pac-Man arrived, proving that not all successful arcade games had to be about space. Nevertheless, Atari licensed the rights to Phoenix and ported it to their Atari 2600 home system, but surprisingly to nothing else. Ironically, the company Imagic developed a space shooter called Demon Attack that bore a slight resemblance to Phoenix. Atari sued Imagic, and the settled out of court. 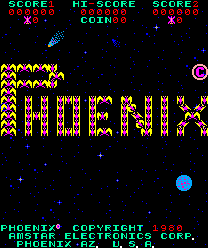 The Phoenix armada is about to invade Earth. Before they reach the atmosphere, you must pilot a ship and defeat each of their different attack waves and turn them away from Earth. The first two waves are the scouts, the second two waves are the soldiers, and the final wave is the mothership. Get past the scouts and the soldiers to earn the chance to destroy the mothership and rescue mankind. 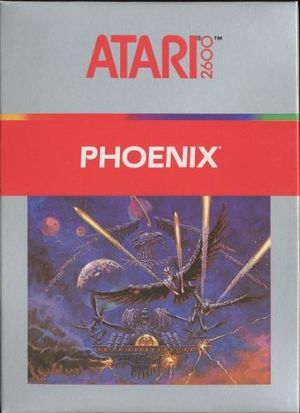 Phoenix is one of five Atari 2600 games that came packaged with an Atari Force comic book. The comic book that came with Phoenix initially appeared in New Teen Titans #27 and DC Comics Presents #53 with a different premise. The story behind the comic was meant to provide a background story for the arcade game Liberator. The script for the story was revised when it was released with Phoenix, and all references to "Liberator" were replaced with "Phoenix".