Maya seems traumatized by Morgan's possible role in the murder and wonders why she would do such a thing. Von Karma then enters and taunts you. You tell her that even if you do lose, it won't bring her father back. Von Karma doesn't care though, so it's a final round between you and her in the courtroom.

The Judge now has Ini testify about her accident.

Mia says it's impossible to prove Ini's motive directly, so you'll have to look at this from another angle.

Press on Ini's third statement. Then Press harder. If Mimi was so tired, why didn't they talk about switching drivers? Ini says she didn't have a driving license. She adds it to her testimony. Unlike most testimony added by pressing, it will be at the very end of her testimony instead of directly after the statement you had to press.

Now you're on target! Present the License Photo. Ini says she got the license about half a year after the accident. There is no proof of Ini ever receiving the license before the accident. Even if she had one, Mimi wouldn't let her drive. Mia asks why. Ini answers with another testimony. Hopefully, you'll now get some real answers.

Ini's Testimony
- I Wouldn't Be Allowed -

I Wouldn't Be Allowed: Cross-Examination[edit]

Press on Ini's third statement. She says it's a new sports car from the U.K. Press harder. The Judge will have Ini revise her statement.

This leaves one question: who was really driving the car? You are given a choice. If Ini was in the passenger's seat, then it would have to be Mimi Miney. So Ini was in the driver's seat and escaped, but Mimi was driving the car yet was killed. This raises another question: who is the woman on the stand now? Present Mimi Miney's Profile. The woman doesn't look like Mimi, but Phoenix informs the court that the resulting burn was so severe, that "Ini" had to undergo plastic surgery to reconstruct her face. Instead of her own face, Mimi probably used her sister's picture to become Ini.

Dr. Grey tried to use Maya to talk with Mimi, but was killed. Why? Mimi wasn't actually dead, as Dr. Grey thought she was. He would've found out during the channeling, so the woman had to take drastic measures to ensure Dr. Grey didn't find out she was alive.

The woman will finally give in to your claim and will admit that she is in fact Mimi Miney, Ini's sister, who was thought to be dead. She also admits to killing Dr. Grey. Mimi threw away her life and continued her sister's. But why? Present Newspaper Clipping 1. The shame of the malpractice incident and the loss of her sister was too much for Mimi to bear. Her face burnt in the accident, she used Ini's picture to leave her past behind and start a "new" life as her own sister.

With Mimi's confession, this leaves one last question: why would Morgan go to the trouble of framing her own niece for murder? You don't have to worry about that right now, as...

It was one year ago. Mimi Miney, a nurse at the Grey Surgical Clinic, ran by Turner Grey, made a grave mistake while distributing patients' medicines, killing 14 patients of the hospital. The incident would have come back to haunt Mimi, but a few weeks later, her life changed forever. As she was driving home from work in her British sports car, with her sister, Ini Miney, in the passenger seat, Mimi fell asleep from exhaustion, after answering several questions regarding the malpractice incident. Suddenly, a jolt woke her up and a few seconds later, a sea of flames surrounded her. Mimi was able to escape the blazing vehicle alive, though badly burnt. Ini was not so lucky and was burned to death.

Mimi's face was disfigured, so she needed plastic surgery to reconstruct her face. The sudden loss of her sister, and the malpractice incident weeks prior, scarred Mimi greatly. Mimi used Ini's picture to have her face reconstructed as Ini, ditching her entire life and starting a new one as her own sister.

The papers presumed Mimi to be dead, and some blamed Dr. Grey for the events that transpired. Dr. Grey was repulsed, as the accusations caused the number of patients he was taking to drop. The only way to stop the accusations was to have Mimi admit to the crimes. Mimi was dead, however (as far as the world knew). Dr. Grey went to ask an occult fan, who was Mimi Miney posing as Ini, about spirit channeling. Mimi was forced to tell him all about Kurain Village, and the Kurain Channeling Technique, because she was, after all, posing as an occult fan. He went to Kurain Village (with Lotta tagging along, to study paranormal stuff) to have Maya Fey, one of the mediums in training, and daughter of the missing master, channel Mimi so Mimi could sign a confession. Maya would only do so if he brought along Phoenix Wright, a defense attorney, and a close friend of Maya. Dr. Grey did so. 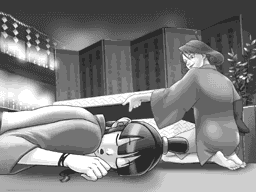 Mimi, as Ini, feared that he would learn that she was still alive, since spirit mediums cannot channel the living. Mimi plotted to kill Dr. Grey, for the sake of her identity. She consulted Morgan Fey for help, who, for some reason, decided to help Mimi frame Maya for the crime.

Mimi took Maya's acolyte's uniform, and a wig made to match Maya's hair. Before the channeling began, she took a large clothing box and hid it behind the folding screen at the Channeling Chamber, where, as the name suggests, the channeling was to take place. Mimi hid behind the folding screen, holding a fruit knife that belonged to the Fey family. Dr. Grey and Maya entered the room with the unique key, which was used to lock the door.

The channeling began, and, silently, Mimi snuck up on the two and drugged Maya with a sleeping agent. Maya passed out and Mimi then attacked Grey and stabbed him in the chest, seemingly killing him.

Mimi dragged the unconscious Maya away, and hid her inside the clothing box. Dr. Grey, however, was still alive, and fired a shot at Mimi. He missed, leaving a bullet hole in the folding screen, the clothing box, and Maya's left sleeve. Mimi took the gun from Grey, and finished him off by shooting him in the forehead from point-blank range.

Hearing the gunshots, Phoenix and Lotta, who were waiting in the Meditation Room during the channeling, broke into the room, seeing Mimi (presuming it to be Maya, channeling Mimi's spirit), and Dr. Grey's lifeless body. Lotta took a total of two pictures before Morgan kicked both Phoenix and Lotta out, under the pretense of performing the "Spirit Severing Technique".

Morgan took the clothes and wig Mimi was wearing, and the key, and threw them in the incinerator. They poured Dr. Grey's blood on Maya's clothes, and rearranged the crime scene so it looked like Maya had done it.

Meanwhile at Winding Way, as the "channeling" and murder took place, Pearl Fey, Maya's cousin, and Morgan's daughter, was playing with her ball when she accidentally knocked over the sacred urn that was supposed to contain the spirit of Ami Fey, the founder of the Kurain Channeling Technique. The fall shattered the urn. Fortunately, the pieces were big, so Pearl tried to fix it. However, she did it poorly. The urn even said "I AM", rather than AMI, due to Pearl's illiteracy. Neither Morgan nor Mimi saw Pearl, so their alibi would eventually be broken.

After a happy reunion between Maya and her late sister, Maya asks Phoenix why Morgan would help Mimi kill Dr. Grey, and frame her for the murder, ultimately sending her to prison. Present Pearl Fey's Profile. The reason Morgan wanted Maya to be hauled off to prison, is because in the absence of both sisters eligible for the position of Master of Kurain (with Maya in jail, and Mia dead), the next person in line would come from the closest branch family - namely Pearl, whose powers are supposedly as strong as the Master herself.

Morgan, meanwhile, is hauled off to prison for being an accomplice to murder. However, she doesn't intend to simply give up the position of Master to Maya yet...

To find out what Morgan is planning next, play "Phoenix Wright Ace Attorney: Trials and Tribulations" final case to see where everything finally comes together in Maya's family and your past unraveled for the first time.