You get a call from de Killer, who tells you he will send a "present" to help you win this case. What could it be?

Inside the courtroom, you will notice that von Karma is absent. What happened? The bailiff comes in and says von Karma has been shot! Could this be the present de Killer was talking about? Whatever it is, it must be helpful without a prosecution.

However, Edgeworth comes in. He tells the court that von Karma is alive and well and he will be taking her place. Well so much for that "present" but hey, it will help with the last part of your amnesia since the start of the game. Being a professional prosecutor, he might still help you since "Rise From The Ashes".

Edgeworth calls Gumshoe to the stand and has him describe the facts of the case. He's already familiar with this case and Gumshoe has to turn in his badge after this trial. You should feel sorry for Gumshoe. But for now, let's win this case for Maya's sake!

Bare Facts of the Case: Cross-Examination[edit]

Press on statement three. Gumshoe will show you the crime photo. If you look closely at his bandana, you will see that it's wrapped tightly around Corrida's neck. It looks like he died from strangulation, but what about the knife? Gumshoe claims it was put there on purpose after the crime. Juan's Autopsy Report will be added to the Court Record.

Press on the fourth statement. The guitar case was suspicious because it was empty. They only found Corrida's fingerprints on it. The Guitar Case will be updated in the Court Record.

Press on the fifth statement. They found the guitar at the TV studio Corrida works at. He only brought the case with him, but why?

Edgeworth has heard enough. He states that Corrida was strangled to death, yet there was a knife on the body. Edgeworth has Gumshoe testify about Engarde's arrest.

Present the Knife on the sixth statement. It says "Gatewater" on it, so the murderer couldn't have just purchased it, therefore it couldn't be a premeditated murder. Edgeworth however, says the knife belonged to Engarde's Hotel Room. Remember, there was a knife missing on Engarde's table. Engarde probably took the knife to stab Corrida in the chest.

Darn, a trap. Edgeworth challenges you to present new evidence to counter his claim. Not only that, you're given one chance to prove it. (Warning! Make sure to save because the if you present anything other than the Wine Glass in the next part you will get a Game Over!) When asked if you would say Actually, I do, Present the Wine Glass. If you look at the crime scene, there is a complete mess, probably due to the struggle. However, the wine glass is intact. Edgeworth sees no importance, as the wine glass was set down by Adrian Andrews, the woman who discovered the scene. He suspects she set it down after the crime without thinking. When asked if you agree, say There's no way.

Andrews could not have set it down. Probably someone else? Edgeworth says they found Andrews' fingerprints and no one else's. The Wine Glass will be updated to the Court Record. Andrews probably set it down after being shocked upon seeing Corrida's dead body. Darn, another trap. It looks like Edgeworth had provided explainable evidence, but he isn't done yet as he has a witness to confirm the crime scene. Unfortunately, the person in a spacesuit with a ray gun turns out to be Wendy Oldbag! Not again!

Edgeworth has Oldbag testify what she saw at the crime scene (even though he thought he wouldn't see her again).

Warning: When you reach the part with the full penalty, presenting anything other than the 'Wine Glass is a simple Game Over! Get your save spot ready if you're worried about starting over again!

Oldbag's Testimony
- What You Witnessed -

Press on the second statement (though this isn't required). Oldbag says it is about her and Corrida. It sounds interesting, but Mia doesn't feel it is the right time to pursue this further.

Press on Oldbag's fifth statement. How can she tell she saw Engarde? You can't make the same mistake as last year, so when given a choice, choose The person's clothes. Oldbag says Engarde was wearing his racing jacket. The same jacket you saw down at the Detention Center.

The Judge asks you if Oldbag said something important. Say It was very important. Oldbags adds the jacket to her testimony.

Present the Jammin' Ninja's Button on that statement. The button was caught on Engarde's Nickel Samurai Costume. If Engarde was wearing the jacket as Oldbag saw, then how did it end up on the costume in question? Oldbag then testifies on what she really saw.

Oldbag's Testimony
- Who I Saw -

If you are playing the HD iOS release or the HD Trilogy on Steam, press on Oldbag's second statement to get the Judge Wackner achievement.

This is a rather easy one. Present the Knife on Oldbag's fifth statement. If Engarde was wearing the Nickel Samurai costume on his way to his room, he wouldn't leave fingerprints, because the costume includes gloves. Edgeworth says the murderer probably took off his gloves before he committed the murder and supports it by saying Engarde was talking with Corrida and had no intention of killing him. When given a choice, choose There is a contradiction.

When asked to support your claim, Present the Knife. If Engarde went to Corrida's room without any intent, then he might not have brought his knife, and if Engarde was wearing gloves, then there wouldn't be any fingerprints on the knife. So the real killer set up the crime to mislead us. Why? To frame Matt Engarde of course! After a conversation, Oldbag will now admit she was waiting for someone other than Corrida. When asked who, Present Adrian Andrews's Profile. She was waiting for Ms. A.A.!

Oldbag will now testify about this "secret information" she had been holding. Mia doesn't have her hopes up.

Press on the fifth statement. How does Oldbag know about this secret information? Oldbag doesn't talk, so when given a choice, choose Present evidence, then present Lotta's Camera. Lotta kept her notes in her camera case, which Oldbag just happens to whip out during her rant. Oldbag now admits she took Lotta's information, because she thinks Lotta was working for Engarde, so Oldbag wanted to get the information. Oldbag looks very sorry, but Pile on more pressure on her. Oldbag said she only took the information, but you know she is lying, as she took something with it. When asked what, present Lotta's Camera. Lotta said she had a case containing both the information, AND the camera, and she also said both "disappeared" on her. Oldbag gives in and shows the camera itself. The court takes it and investigates it. 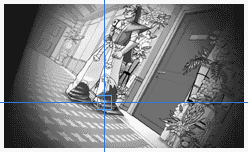 They found one relevant picture, it looks like the Nickel Samurai heading towards Corrida's room! Lotta's Photo will be added to the Court Record. It looks decisive. When asked if you agree, say there's something strange with it. You are given one chance to prove so. One chance! You examine the photo. Present the feet area of the Nickel Samurai. If you look at the posters, The Nickel Samurai's socks are showing. In the photo, however, he is holding his hakama up as he walks, so someone shorter than Engarde was in the costume!

Warning: Like the Wine Glass, if you choose anywhere else but the feet in Lotta's Photo, it's Game Over again! Make sure you have a save spot before attempting this challenge.

It seems you have disproved Edgeworth's claims, but Mia says Edgeworth is unusually calm. Why? Edgeworth wants you to show who exactly was in the costume that night. Present Adrian Andrews's Profile, since she is noticeably shorter than Engarde, she can move freely in and out of Engarde's room, she had dinner with Engarde that night, and finally, she was at the crime scene. So Andrews had an opportunity to murder Corrida and frame Engarde for it!

You have proven Andrews's opportunity, but Mia brings bad news: what you have proven has prompted The Judge to have Andrews testify, so he's going to adjourn court until tomorrow. No! Doing so would kill Maya! You are given a choice... It doesn't matter which, since Edgeworth will request to prolong the trial, as he expected you to subpoenate Andrews. This is bad news, but the good news is The Judge calls a recess rather than going for tomorrow, so you should thank Edgeworth and shake your fist at him at the same time.