You can hear the sound of footsteps of someone walking towards a jail cell. You see what looks like a police officer lifting the sheets of an empty cot. Lights turn on and you can hear the sounds of an alarm. The scene then shifts to two men talking late at night. In the middle of a conversation you see a blue beam of light follow by what looks to be a dagger thrown at them. It misses and stabs into the wall. The screen zooms in on a floating robe with a golden mask in the distance. It flies towards them with incredible speed. It slams into the two men, grabs the dagger from out of the wall, and looks down at them. Screams shortly follow. 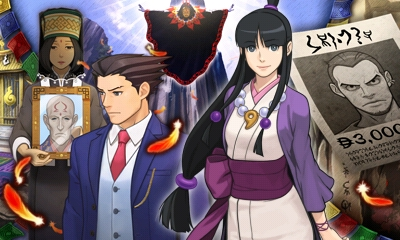 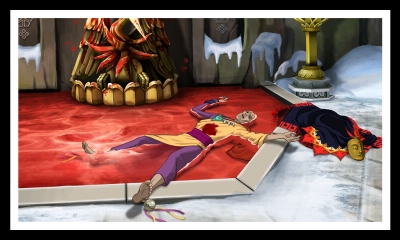 A defence attorney who travels to Khura'in to visit his former assistant Maya Fey, Phoenix shows up in the courtroom for the second time to defend Maya.

A spirit medium currently at Khura'in for training to master the Khura'in Spirit Channeling Technique.

The high priest of Khura'in, who was allegedly stabbed by Maya during the Purification Rite.

An acolyte of the high priest, who was allegedly stabbed by Maya during the Purification Rite.

A famous Khura'inese prosecutor who travels around the world, taking on court cases.

An amnesiac man who claims to have seen the moment when Maya killed Tahrust while on a mountain.

The princess of Khura'in, whose Divination Séances are said to reveal the truth behind a victim's final moments. She follows Phoenix, making sure he doesn't do any misdeeds.

The wife of the high priest, who carries around a picture of her husband after his death.

A rebel and a member of the Defiant Dragons. He was wanted, so he disguised himself as A'nohn Ihmus.