We see two men arguing. One man is warning another man about some woman, saying that it would be bad news if he continues to hang out with her. The latter refuses to believe this and eventually snaps. We then see an electric spark. We cut to a man, lying down and not moving. We see the latter's face. "I didn't do it!" pleads Phoenix Wright. 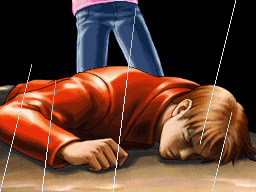 Mia Fey A rookie attorney at the time. This is her second case in her career. Even Mia had trouble preparing in her earlier cases.

Phoenix Wright A college student at Ivy University at the time of the case. He is the defendant of this case and you have to prove him "not guilty".

Doug Swallow Swallow is also a college student. He was killed at the University, supposedly by Phoenix.

Winston Payne Your opponent for this case. Payne is known as the "Rookie Killer". He can sound professional but falls apart real easily. Around the time, he has a full head of hair.

Dahlia Hawthorne A witness for this case who is also a college student. Dahlia seems sweet and delicate.

Marvin Grossberg Mia's mentor who will be teaching you Court Mode in this case.