The episode kicks off with a robbery. A couple of detectives (one of them should be familiar with the veterans of the series) check on a safe. Apparently, someone had just attempted a robbery. It looks like the security scared him off right? Wrong! The mysterious phantom thief Mask☆DeMasque has taken the valuable item. The thief flies off and disappears into the moon. 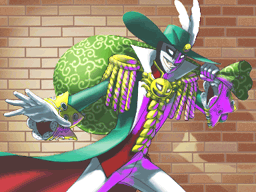 Phoenix Wright A defense attorney who rather enjoying some fame. Phoenix will be facing his first case that doesn't involve a murder.

Ron DeLite A crazed fan of The Mask☆DeMasque who claims to be the phantom thief himself. He even dresses like him. He can be very emotional at times and can sometimes trail off on sentences. He was once a security guard.

Maya Fey Maya is a spirit medium in training and Phoenix's assistant. As part of the Kurain Tribe, she is happy that she is presenting Kurain's most prized possessions.

Of all of the treasures, this is the most valuable one. It was supposed to contain the spirit of Ami Fey. (Until Pearl accidentally broke it a year ago.

Godot A mysterious and blind prosecutor who is facing his first case. He really loves coffee and almost drinks it constantly. He seems to know Phoenix and holds a grudge against him, but why?

Luke Atmey A self-proclaimed "Ace Detective". Mask☆DeMasque is his arch-enemy and has been hunting him down since his first heist. He devotes his life into truth and justice. In reality, he only wants attention.

Pearl Fey Pearl Fey is Maya's younger cousin, who is already much spiritually stronger than "Mystic Maya". She is extremely honorable and sister-like to her cousin and always stands by her. She doesn't know much about the world outside her village.

Detective Dick Gumshoe Detective in charge of the Mask☆DeMasque investigation. Gumshoe is absent minded and can be short tempered at times. Mostly he is a friendly and helpful character.

Mia Fey Phoenix's deceased boss and mentor. Phoenix's friends Maya and Pearl can use the Kurain Channeling Technique to summon her spirit, just in case Phoenix is cornered.

Larry Butz Phoenix's childhood friend. Larry is a highly emotional man, who usually gets himself into trouble. He usually works in part-time jobs (such as security man at KB Security). He also likes women.

Adrian Andrews A young woman who is much different from when you first met her, very happy and confident. She works at the basement of the Lordly Tailor.

Mask☆DeMasque The mysterious Phantom Thief. No one knows his true identity... yet.

Kane Bullard CEO of KB Security. What's his connection to the case?

Detention Center This is where your clients (in this case Ron) are held at.

Lordly Tailor Department Store This is where the treasures of Kurain Village are presented at.

Atmey Detective Agency This is where Ace Detective Luke Atmey works at. He looks kind of rich and self-centered.

"Mask☆DeMasque's" Hideout This is where Ron and his wife Desirée live. It shows Ron's Mask☆DeMasque fandom.

KB Security CEO's Office This is where Kane Bullard works at.