Maya arrives with the Mask☆DeMasque Publicity Photo which will be added to the Court Record. Ron screams in, again admitting to the heist. Just then, Desirée butts in, again saying otherwise and trusts that you will prove it. Is Ron really Mask☆DeMasque? He doesn't have the urn, so there is only one way to find out.

You prepare for the trial as you are introduced to Godot, who claims he never lost a case... or won. It turns out, this is his first case as a prosecutor. Godot says he came back from the depths of Hell to battle you. And just how does he know you, and what's with the mask? It looks like Godot is very confident. His special trait is his absolute love of coffee of any kind! No wonder he's able to stay awake in the courtroom. He likes to call you Mr. Trite throughout the game. Not a bad nickname if you think about it. The last and the most intriguing thing about him is the ridiculous metaphors he uses throughout, which frankly, not everyone can understand. So you're going to have to get used to it.

The Judge will call his first witness.

Gumshoe takes the stand. He testify about what he knows about the thief. 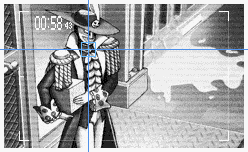 Present the Sacred Urn on the 4th or 5th statement. Just look at it. It doesn't look like a type that would be valuable. In fact, Mask☆DeMasque normally wouldn't go for something that is priceless as a simple urn. So did Mask☆DeMasque really steal the urn? Godot responds by saying you think an imitator may be the culprit and asks for proof. It looks like you have to show evidence. Compare the Security Camera Photo with the Mask☆DeMasque Publicity Photo. See the difference? Present the Security Camera Photo. Now you need to show the difference. Present the "Fake☆DeMasque"-'s chest area.

Now look at the publicity photo. It looks like broach is clasped on the chest. Now, if you look at the Security Photo, it's not there! So does that mean this Mask☆DeMasque really is a fake? Probably not, as Godot will present the broach itself. Godot says he found it at the crime scene near some sort of Buddha statue. (He probably means Ami) So hows does this prove that Ron is in the costume? Fingerprints. There are Ron's fingerprints all over the broach. It has a piece of cloth on the back of the broach, so there has to be a struggle. DeMasque's Broach will be added to the Court Record.

Godot will now call in the next witness, Luke Atmey. Luke will testify about what he saw while he was on patrol, alone.

Zvarri! You're going to have to ace his testimony by pressing and presenting evidence to ace his conviction!

Atmey's Testimony
- What I Witnessed -

Present DeMasque's Broach on the 3rd or 4th statement. Look closely. It looks like it was ripped off the piece of clothing, as there was a struggle on some point of the heist inside the basement. And the only person to have made Mask☆DeMasque struggle is Atmey, because he was the only person at the crime scene that night.

So does that mean Atmey fought with the thief? Why did he lie just now? Godot has Atmey explain his lie in another testimony.

Press the 4th statement: (though not required) This will reference to the beginning of the previous game "Phoenix Wright Ace Attorney Justice For All", in which Phoenix did get hit by a fire extinguisher and thus, lose his memory, forcing himself to remember who he is and his relationship to everyone all over again.

Atmey's Testimony
- Fight With The Thief -

Fight With The Thief: Cross-Examination[edit]

Press on the 5th statement. Atmey tried to use the "Atmey Fighting Style" but was overpowered. Ask about this Atmey Fighting Style? Atmey will say it is to put your back behind the wall so no one can get behind you. You are asked if this is important, answer It was very important. This "secret" information will be added as a statement.

Present the Shichishito on this statement. Yesterday, Atmey told you that he was struck from "behind", so now he is saying he was struck in the forehead? You also consider the fact that Atmey hid the calling card from the police, as if he doesn't want them to help with security. Godot, with his first "Objection", will ask what you are trying to get at. You are given a choice, assert that Mr. Atmey is Mask☆DeMasque. How? You explain that Atmey was in charge of security, so he dressed up as the Mask☆DeMasque and stole the urn, all while manipulating the security camera!

It looks like you caught him red-handed, but suddenly, another "Objection" from Godot (along with coffee on your face). He, of course, wants proof of your claim. Say that the said proof has yet to be found, because choosing otherwise would get you nowhere.

It looks like your arguments have fallen apart, however someone steps in. It's Desirée! She brought in the bag you tried to check in yesterday. What's inside? The urn! The Sacred Urn will be updated to the Court Record. Note the profile photo. Does this mean you are saved? Not quite, as Godot is accusing Desirée for trying to protect her husband. Just where was the urn before it was "found" at the detective's office? You know she wouldn't commit crimes, so you'll have to help her. When given the options, choose to Show the fingerprints on the urn.

Atmey will remind you that his fingerprints would be pointless, because he was guarding it the whole time and he was wearing gloves. It looks like you have to test someone else's fingerprints. When given the chance Present Phoenix Wright's Profile (that's right, you). Yesterday, you didn't get to see what's in the bag, but you did touch it. So if it has your fingerprints on it, then it is surely the urn found at Atmey's office.

Godot argues that it still doesn't prove when the urn was put there. However, tear that argument apart by saying Andrews polished the urn. If she did, then she washed away most if not all of the fingerprints on it.

Atmey will now say that he already knew that your fingerprints are on it and will now confess that he is, in fact, Mask☆DeMasque.

The Judge has now decided a verdict. But before he does so, Ron will interrupt. He, or course, doesn't want to give up his alias. Godot wants him to prove that he really is the phantom thief. You will hear Ron's "confession" in the last testimony of the day.

Just how bad does this guy want to be in jail?

Present Ron's Wallet or the Key Card on statements 2 or 3. Alternatively, press on statements 3 for the same thing on the previous sentence followed by Present Evidence. Ron had realized he lost the wallet on the night of the crime and he had it when he and Desirée went for dinner that night. You reveal that the wallet was found at 1:00AM at KB Security headquarters. It was probably because Ron was actually there that night. Not only that, but it takes 30 minutes to go from KB Security to Lordly Tailor that night.

You can also alternatively present the Blackmail Letter on statement 2. This will prove that Ron has an alibi, however, Ron will say that you also have to prove that he went to KB Security that night. Present Ron's Wallet. Phoenix will say the the wallet was found at 1:00 AM at KB Security Headquarters. This option will also continue on to the next paragraph.

You now have shown Ron's alibi, but Godot doesn't want Ron to give up just yet. Ron will say that someone else must have planted the wallet there. You counter his argument saying that Ron did drop his wallet as he is using the KB Security Card to go in the CEO's Office. Godot now wants you to show motive. Present the Blackmail Letter. Someone apparently was trying to blackmail Ron, telling him to bring $50,000, so Ron had to face the blackmailer, possibly the CEO.

Godot now wants a witness that would prove your claim, such as the CEO. But, you never talked to him, so you will have to show a different witness. Present Larry Butz's Profile (Did The Judge remember him two years ago? Sadly, he's forgotten). Larry works as one of the security guards at KB Security. Yesterday, he told you that the key card at KB unlocks the CEO's office. If you use it, the door will keep a record who entered the door and when. You request to analyze the key card.

The results come back and it is just what you hoped. After announcing the CEO's name, Kane Bullard, Godot announces that Ron's card was indeed used 1:00 in the morning, meaning Mask☆DeMasque as seen in the crime photo is definitely not Ron. Godot admits defeat and The Judge hands down the final verdict.

Ron still seems glum though he isn't guilty. At least everyone else is happy about Ron being acquitted.

The celebration has fallen short however, as Godot arrives to bring some bad news. At the same time the urn was stolen, Kane Bullard, the CEO of KB Security, was murdered, right at his own office! What's more is that you have proven that Ron was there at the time. You have even proven his motive, blackmail. Therefore, Ron, the person you have saved from all charges, is now charged once again, this time for murder, thanks to you!

It looks like this story is far from over.