The defendant is found Guilty!... wait, what!?

The Judge announces the guilty verdict despite plea from the defendant, who claims to have seen someone else at some table and that someone killed the victim. Apparently, the court thinks that the victim was alone. So who is defending the defendant? You!? And you lost to Winston Payne!? What is going on!? 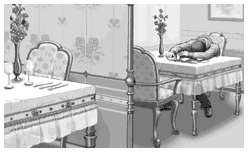 Phoenix Wright The papers say that you had lost the case... but you claim that never took it. Does that mean a "phony" Phoenix is running around?

Maggey Byrde Those who had played the last game will notice this is the second time you will be defending her. She works as a waitress at the Trés Bien. Can you manage to overthrow the "Guilty" verdict given out a month ago?

Glen Elg The victim that was poisoned at the Très Bien Restaurant. Maggey claims she saw someone else at the restaurant.

Godot A mysterious and colorblind prosecutor. He really loves coffee and almost drinks it constantly. He seems to know Phoenix and holds a grudge against him, but why?

Jean Armstrong A highly effeminate chef. He is the founder and owner of Trés Bien.

Maya Fey Your assistant and spirit medium in-training. She is quite cheerful and sometimes pesters Phoenix for fun.

Detective Dick Gumshoe Gumshoe is confused and sometimes doesn't really follow conversations. He has taken a liking to Maggey since her days as a police woman.

Mia Fey Your deceased boss and mentor. Your friends Maya and Pearl can use the Kurain Channeling Technique to summon her spirit, just in case you're in a tight spot.

Furio Tigre A badass gangster, with red skin and roars like a tiger. He owns a company called Tender Lender. Also known as, well, The Tiger. Appears to look a lot like Phoenix. May be the fake attorney that tarnished your reputation.

Viola Cadaverini A rather creepy woman who works with Tigre at Tender Lender. Believe us when we say, don't go near her.

Lisa Basil A inhuman-like woman who works at Blue Screens Inc., where Glen used to work at.

Bruto Cadaverini The most powerful mob boss in the city. Not to mention the most feared.

Detention Center This is where your clients (in this case Maggey) are held at.

Criminal Affairs Department This is where detectives, such as Gumshoe, work at.

Trés Bien French Restaurant The crime scene. Was there really someone else at the table of the victim?

Trés Bien Kitchen This is where the food (which is expensive and awful) was made.

Vitamin Square A small park that is located right next to Trés Bien.

Tender Lender A company that, as the name states, lends money.

Blue Screens Inc. A futuristic company where computers are made.