Gumshoe doesn't feel satisfied with what you have right now and wants to go back to the precinct to check something. It should take an hour, but court would be reconvened by then, but heck Present the Small Bottle. Gumshoe doesn't have fingerprints yet, so this may be your last chance of getting a trump card. Presenting other items has Maya in shock, telling you to give Gumshoe the Small Bottle.

Tigre will be called up to the stand. True to his name he likes to roar his heart out and scare everyone in the courtroom. Even the judge and Maya will hide behind the stand. You and Godot, however, were not scared of the Tiger. Let's hope you are brave enough to face against the Tiger in this courtroom!

The Judge proposes a warning that irrelevant pressing will give you a penalty, so think hard and choose wisely. So newcomers, avoid pressing further on statements 1, 3 and 4 since those would only harm your court case further.

Press on Tigre's 2nd statement. Tigre will say that his secretary (Viola) marked his calendar to stay in the office all month. Press harder. Tigre will say he never met Glen on December 3rd. The last bit will be added as a new statement.

Present Glen's Calendar on that statement. Glen marked the calendar on December 3rd, saying "Meet with the Tiger". So, it is obvious Glen knew Tigre. Tigre still denies meeting with Glen. He will explain in another testimony.

Present the Trés Bien Matches on the 5th statement. You found this on the desk at Tender Lender and it belonged to Trés Bien. Tigre will now say he actually did go to the restaurant, but he never met Glen. Time for another testimony.

Godot proposes a penalty rule if you press on irrelevant statements. If you do insist in pressing statements, stick to Statements 3 and 4 since you won't be penalized from that.

Now you have to show who the impostor victim was that made Victor mistakenly testify wrong. Present Furio Tigre's Profile. With the Tigre's roar, you hide behind your stand for the moment.

Godot will remind you that Victor saw the waitress sprinkle in the poison, so if what the victim Victor saw was really an impostor, then it is obvious that the waitress was in the play too. At that point, you object and come out from hiding. When Maggey fainted, Tigre used that advantage to put someone in the waitress outfit and pour in the "poison". When asked who, Present Viola Cadaverini's Profile. Yesterday, Maggey told you that there was another customer. You will now explain the contradictions for this case.

Tigre is still not giving up that easily. He does confirm that he was at Trés Bien, and he did meet Glen, but he asks you one more question. Did he really poison Glen? Sounds like one last testimony is afoot.

Tigre's Testimony: Ties to the Victim[edit]

Tigre's Testimony
- Ties to the Victim -

You will now have to explain Tigre's motive for the murder.

Ties to the Victim: Cross-Examination[edit]

Press on Tigre's 6th statement. He says that the waitress was Maggey. Ask how things would've been. This will add a new statement.

Present the MC Bomber, Viola's Medical Papers, or the Sports Paper on that statement. Tigre wasn't after the money, he was after MC Bomber, a virus that could be worth millions of dollars. When asked why he would be after the large amount of cash, Present Viola's Medical Papers. If you presented the medical papers during the cross examination, you would be asked what Tigre was after in order to get the money. In that case, Present MC Bomber.

4 months ago, Tigre was involved in a traffic accident, where a young woman was injured. She had to go to the hospital to have surgery. The surgery cost $1,000,000. But why did Tigre pay for it? Because his life depended on it! The said woman's name was Viola Cadaverini, precious granddaughter of Bruto Cadaverini, the mob boss who controlled everything in the underworld. Tigre had to do desperate things to get the money he owed them, even when it means killing the person who would pay his own debt!

Glen won the lottery, so Tigre had no legitimate chance of receiving the money, so he had no choice but to kill Glen! Afterwords, Tigre framed Maggey by re-enacting the scene with him the victim and Viola as Maggey to create a witness, Victor Kudo! Tigre now asks you how he managed to put Maggey where she had no escape from custody. Present the Paper Badge. A month ago, he posed as you, to ensure that Maggey is convicted once and for all! The Judge agrees, considering the childish job "you" did at that time!

Now you have Tigre cornered... or have you? Godot asks for one more thing, evidence. He wants you to show that Tigre really did kill Glen. But, you don't have it!... until Gumshoe arrives with that evidence, just in time! A recess will be called.

Gumshoe has confirmed the fingerprints on the medication, and they were Tigre's! However, you say this may not prove anything, as it is just Glen's medication. Gumshoe will leave in despair.

The Small Bottle will be added to the Court Record. It looks like you have to show Gumshoe and Maggey the decisive evidence isn't completely useless after all.

Back in the courtroom, you are given the chance to present this final, decisive, evidence that would stand in court. Present the Small Bottle. You are asked to say what is in the bottle. Everyone in this courtroom knows... except for Tigre. If he made a phony crime, and became a phony lawyer, then you're just gonna have to fight fire with fire with phony evidence. When given the choice, say that the bottle contains potassium cyanide.

However if you choose Mr. Armstrong's oils or the victim's ear medicine, you'll get penalized.

You ask Tigre if this was the bottle the murderer used to kill Glen. Tigre says it isn't... the bottle was brown and made of glass. But wait, how does he know? A long pause follows...

Well no one does, except for the real murderer! And since Tigre knows it, he has just inadvertently admitted his guilt!

If you still like the coffee in the face gag, it's after the Tigre's roar and the lights black out.

Also, the ending is similar to "The Stolen Turnabout" case with the so called Ace Detective that everyone but Luke Atmey with the testimony instead.

The entire thing started 4 months ago with a traffic accident. Furio Tigre, owner of loan shark Tender Lender, had collided with Viola Cadaverini, granddaughter of the feared mob boss Bruto Cadaverini. Both Tigre's pink scooter and Viola's car were damaged. Tigre survived without any serious injuries, but Viola suffered major cranial damage and had to undergo surgery. Viola's operation was a success, but Bruto wanted Tigre to pay for his precious granddaughter's surgery which, possibly with a "settlement" value added, amounted to about $1,000,000. Bruto warned Tigre that if he didn't pay by New Year's, he would shut down his business (and possibly assassinate him). Tigre became desperate and started searching for the money.

Viola slowly recovered from the accident. Tigre looked carefully after Viola under the guise of caring for her; in reality, it was to get Bruto off his back. Viola trusted Tigre and started working with him at Tender Lender since.

As a loan shark, Tigre lent $500,000 to Jean Armstrong, founder and owner of Trés Bien, a restaurant that didn't live up to its French name, and $50,000 to Glen Elg, a man with a huge gambling addiction. As a skilled professional programmer at Blue Screens, Inc., he made a virus called MC Bomber, a program that could spread through computers and destroy data. Tigre became interested in it, because it was worth millions of dollars in the black market. Tigre agreed to meet Glen at Trés Bien at December 3rd, with the latter believing it was simply to pay off his debt, which became $100,000 due to interest. 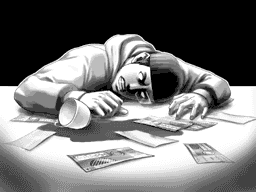 They met at the proposed time, date, and place. The only waitress at Trés Bien, Maggey Byrde, served coffee to the two and noticed the disc. Tigre would now get MC Bomber from Glen and pay off his debt... or so he thought. Glen was listening to a lottery show that occurred at 1:30PM on the earpiece from his right ear, for his left eardrum was ruptured in a fight the day before, leaving him deaf on that side. Glen won the lottery with the ticket, worth $500,000. Since it was more than enough to pay his debt to Tender Lender, Glen had no reason to give up MC Bomber.

This wasn't good for Tigre, as he needed MC Bomber to pay off his debt to save his life, so he had to take extreme measures. He slipped some potassium cyanide (an extremely strong poisonous compound) in Glen's coffee. Glen drank it and died shortly after. Maggey, witnessing the event, passed out from shock.

Suddenly, Armstrong came on the scene. He owed Tigre $500,000 in loan, so he had no choice but to help cover up Tigre's tracks. First, they moved Glen's body and the unconscious Maggey into the kitchen, where Tigre changed into Glen's clothes and took the victim's seat. Viola, a "customer" at the time, dressed up as a waitress. They acted out the scene which had occurred a half hour earlier; except with Tigre, as Glen, sitting alone, and with Viola, the waitress, spiking the coffee. They did this to establish a witness - who would be Victor Kudo, an old man and a regular at Trés Bien due to his attraction to waitresses. Armstrong told Victor to call the police, removing any witnesses from the scene for what he was about to do next.

As Victor looked for a phone booth, Tigre and Armstrong brought Glen's body back to the scene and put the incriminating evidence, the potassium cyanide bottle and the lottery ticket, in Maggey's apron. The police arrived and promptly arrested Maggey.

Now that he had MC Bomber, Tigre could finally use it to pay off his debt. He gained respect from the Cadaverini family, and Viola continued to be his assistant. Tigre then did one last move to ensure Maggey's conviction - dressing up as the famous defense attorney Phoenix Wright and performing poorly against prosecutor Winston Payne, thus losing the case. Poor Maggey, who supposedly had a motive as proven by Payne, was found guilty, leaving Tigre to get away with everything... for the time being.

Maggey is very happy that you finally got her an acquittal. It's all thanks to Gumshoe, but she still isn't happy about him for what he did yesterday. It looks like you need to show that Gumshoe really cared for her after all. Present Gumshoe's Lunchbox to make her feel better. Don't worry, things will work out.

And that concludes the filler cases! The next case is now the beginning of the real deal of this game. 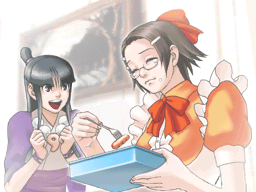