You continue as Mia as this is your first case before "Turnabout Memories". You will meet your client, Terry Fawles, who is a prison escapee on death row. Apparently, the victim was the one who got Fawles convicted, but Fawles insists that he didn't kill "her".

Unfortunately, it will be hard to ignore Terry biting on the big black ball connected to the chain and has a similar characteristic to Phoenix from the first case.

You meet your partner, Diego Armando, who says that Grossberg is sleeping. He will accompany you on your case. He says that the prosecutor is also a rookie, but he has a reputation as a "genius". He now calls you a kitten. You'll notice that he's holding a mug with coffee in it and using metaphors that doesn't make sense. Does this ring a bell?

You head into court (with a different judge you briefly saw in case 2) and the prosecutor you are facing is none other than Miles Edgeworth, who entered the office at the age of 20, three years younger than yours. Edgeworth will reveal that Terry had a motive for killing Valerie Hawthorne, a Police Sargent. She witnessed the event of the last murder, where a 14-year-old girl was thrown off a bridge and her testimony is what got Fawles convicted. Fawles wanted revenge, so he killed her before his death sentence.

Those who played the Phoenix Wright: Ace Attorney case, Rise from the Ashes will recognize his first prosecutor clothes on the wall (while Phoenix and Ema were investigating the chief prosecutor crime, which at the time was Lana).

Edgeworth will call up his first witness. Of course it's Gumshoe. He will summarize the events: (not before hitting on you first.)

The victim's name was Police Sargent Valerie Hawthorne. She died from blood loss from being stabbed from the back according to the autopsy report. She died between 4:00PM and 5:00PM. Gumshoe presents a map, which shows that Fawles and Valerie met on Dusky Bridge. After killing her, Fawles put the body in the car and tried to get away, but was recaptured by the police soon afterwords. No traces of blood were found on the bridge presumably because of the thick coat Valerie was wearing.

The Dusky Bridge Map will be added to the Court Record. Gumshoe will now lend his first testimony.

Gumshoe's Testimony
- Summary of the Incident -

Summary of the Incident: Cross-Examination[edit]

Press on the first statement. Gumshoe reveals that it was Fawles who called her. Valerie also left a note on her desk. The Victim's Note is added to the Court Record. Check the Victim's Note first. It says:

Press on the fourth statement. Gumshoe says that the car was stolen. He presents the crime photo, which shows the body inside the trunk. The Crime Photo will be added to the Court Record. There was a knife stuck in the back. A new statement will be added.

Present the Victim's Note on that statement. It says here that Fawles wanted to recognize Valerie to make sure she was wearing a white scarf. If so, then where was it in the picture? Gumshoe says he didn't find it in the car. Just then, Edgeworth presents the scarf itself. It turns out that he took it in secret to investigate further! It looks like it is covered in mud. Just why did he hide it!? The Scarf is added to the Court Record.

Edgeworth requests for another testimony, as he likes to show proof that both Valerie and Fawles did indeed met on Dusky Bridge.

There was a witness, with a photo? The witness says she doesn't want to testify, as she is very delicate. The Witness's Photo will be added to the Court Record. Things are looking clear already, the opportunity and motive are proven. 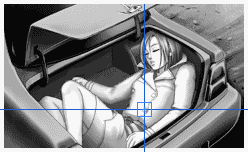 Present the Crime Photo on Gumshoe's fourth statement. Something isn't right here. When given the chance, present the victim's coat on the photo. When she fell on the wet bridge, it should be wet and muddy due to the weather. Edgeworth objects and will now say the bridge couldn't have been wet despite the wet conditions. Prove him otherwise by Presenting the Scarf. Edgeworth now wants you to try to point out the false evidence that led to the contradiction you have just proven.

Answer that the false evidence is the witness's testimony. The witness said that they saw Fawles push the Valerie down the bridge, yet while her scarf is muddy and wet, her coat was found to be clean by the police. You request that the "eye-witness" will be called up. Edgeworth accepts your request and calls the witness to the stand.

At first sight you will recognize the delicate-looking witness from somewhere, but we'll go to that later. The witness will say that she would make mistakes in her testimony. The court would seem pretty hard on you from here. The girl will introduce herself as Melissa Foster (you know she's lying right?). Melissa will testify about what she saw at the crime.

The Camera Melissa was using will be added to the Court Record.

Present the Witness's Photo at Melissa's fourth statement. If both people were fighting on top of that bridge, then it would be considered a "crucial moment". It looks like she took the photo after that "crucial moment". Melissa will cover her mistake by saying that her film was full and the photo was the last one she took. All of the others were pictures of her playing among the flowers. Who was taking the picture? She mentions that her camera has an automatic timer. Melissa will revise her last two statements:

Present the Dusky Bridge Map at either of those statements. There was a collapsed part of the bridge where Melissa said she ran from. She would not have ran 5 yards from Fawles, let alone 10!

Edgeworth, however, reassures the court that the map you presented was a diagram made after the crime. There were no official blueprints to the bridge. So while the bridge is being deconstructed, you can't prove that the bridge broke during the incident; you can't even tell from the photo!

Melissa's Testimony: Running from the Crime[edit]

Melissa's Testimony
- Running from the Crime -

Running from the Crime: Cross-Examination[edit]

Present the Dusky Bridge Map on statement three. If Fawles carried the body to the car just to get rid of the body as Melissa said, he couldn't have done it in an easier way. Earlier, Edgeworth stated that the current of Eagle River was very strong and the bodies were never found. So, Fawles could have hid the body in an easier way by just throwing it to the river.

It seems kind of odd of what Fawles did, but Edgeworth will again reassure the court that your theory doesn't really change the fact what Fawles did, so what you just said was just trivial. Edgeworth has Melissa replace her third statement.

Present either the Witness's Photo or the Dusky Bridge Map on this statement. Melissa claims to have seen the car itself, but that isn't possible, as according to the diagram, there was a cropping of a huge rock in the way. Edgeworth will say that the rock wasn't tall enough to block her view, but you counter it by showing the witness's photo, showing that the rock really is too tall for her to see. Therefore, it wouldn't be possible for her to see the car from where she was! 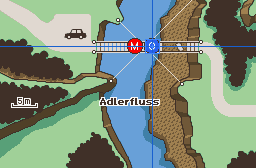 Melissa will then say that she has made a mistake, but Diego asks one question to her. What did she see on the car. Melissa will say she is certain that she saw marks on the trunk. The photo says that she is right. When asked if you are satisfied, say that it doesn't work. Melissa said earlier that she was taking pictures in the flower field, so how did she know that the car had scratches around the keyhole? Say that she put the corpse in herself.

Melissa knew about the scratches because she put the body in herself. Edgeworth would like you to explain about the witness's photo. Present Melissa's Camera. If you look carefully at the camera, you would see that it had timer and a tri-pod when the picture was taken! If the timer really is on, then it is possible that Melissa might not have been in the fields as she said. When asked where she was, Present where the "Blue V" or the Victim is on the map.

Melissa was actually on the bridge, dressed as Valerie! Fawles probably didn't recognize Valerie, so he didn't know that the real Valerie was already dead. Edgeworth wants proof that Fawles didn't recognize her. Present either the Victim's Note, or the Scarf. Fawles wanted to recognize Valerie by the white scarf according to the note, so Melissa used the scarf to fool Fawles!

Melissa faints upon hearing this. It looks like you are getting closer to the truth. The Judge will call a recess.