The episode begins with another mention of the legendary Shichishito, the sword briefly mentioned in the second case. We see a shot of someone with the sword punctured on her back. 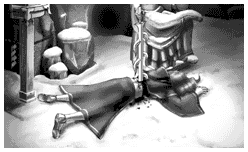 Miles Edgeworth One of Phoenix's earlier rivals and childhood friends. He is a "genius" prosecutor in the past. His role in the past also plays an important part in this case.

Phoenix Wright The reason Phoenix took this case is to chase something from his past. What will this case lead him?

Sister Iris One of the nuns at the Hazakura Temple. She also seems to be familiar with Phoenix, but why?

Elise Deauxnim A famous illustrated children's book author. Pearl is a big fan of her works. She is a very mysterious woman, but why did she come to the temple anyways?

Franziska von Karma A child prodigy as a prosecutor, and also Phoenix's rival, albeit more sadistic. She seems a bit softer than the previous game, but she is just as pride driven and whip-happy as last year.

Godot A mysterious and blind prosecutor. He really loves coffee and almost drinks it constantly. He seems to know Phoenix and holds a grudge against him, but why? The mysteries surrounding Godot will be revealed in this episode.

Sister Bikini Another nun at Hazakura Temple. Her jokes are as cold as the training rooms. She looks after Iris as a child.

Larry Butz (aka Laurice Deauxnim) Another childhood friend of Phoenix. He now works for Elise as an illustrator.

Pearl Fey "Mystic" Maya's younger cousin, who possesses much stronger spiritual power than her. She seems strong for her age too.

Detective Dick Gumshoe A clueless and sometimes stupid detective. He is very loyal to Edgeworth and has close ties to him.

Dahlia Hawthorne Phoenix's enemy in the past. She doesn't seem very weak on getting revenge.

Misty Fey Current Master of the Kurain Channeling School. Just where is she anyways?

Morgan Fey Pearl's mother, who is adamant on giving Pearl the Master position. She is currently a jailbird.

Detention Center This is where your clients (in this case Iris) are held at.

Hazakura Temple, Main Hall Where mediums meet and rest at. There are lots of written names on the wall.

Dusky Bridge A high and dangerous bridge, where Eagle River rages under. It became a crime scene years ago.

Heavenly Hall This is where visitors view the scenery. Larry rests in this spot.

Hazakura Training Hall The training room itself. Mediums are left there all night, freezing. But it makes them spiritually stronger. Well, like they say, no pain, no gain.

Inner Temple Garden The garden of the inner temple. It looks like something happened here.