Edgeworth will tell you that Iris will be the witness of the prosecution, and that she is going to make some sort of confession. Von Karma is out of the picture, since she and sister Bikini were helping with the Psyche-Locks, with which they should be finished in about three hours. So your opponent today is, of course, Godot.

Now begins your toughest trial yet. Today, the truth will finally come!

The Canadian Judge (the one with the yellow beard) watching from yesterday is absent from a fever. So the old familiar Judge (with the white beard) will be filling in for his younger brother. Godot calls Iris to the stand.

Iris will confess that she did play a part in the murder! Apparently, she was trying to cover for the real killer! After Elise (Misty) died, she took the body and desecrated it! And just who is she covering for? None other than Maya! But how could Maya kill Elise (Misty)? Even Iris doesn't know!

Things are turning black already as Iris will testify about this "confession."

Also Iris's Testimony has been crumpled up and shoved into a pocket as that evidence can't be used due to the changing circumstances.

Press on the 3rd statement. Iris says that Elise (Misty) threw her staff down and pulled out a dagger. When asked if you have a problem, choose There is one thing.... A new statement will be added.

Present the Victim's Staff on this statement. Elise (Misty) wouldn't need a dagger, because she was already holding a weapon, a sword hidden inside her staff. Godot will say that it doesn't matter, because it doesn't change the fact that Elise tried to kill Maya. You know she wouldn't do that. Present Elise Deauxnim's Profile. You will reveal to the court that Elise was actually Maya's mother, Misty Fey. So, why would Misty kill her own daughter?

Godot presents something from Iris's testimony. The dagger. It turns out it was behind the pine tree at the garden after the battle of mother and daughter. It has some blood in it, but Godot hasn't confirmed whose. The Dagger will be added to the Court Record and will be put through some tests.

The Judge has Iris testify about the battle between Misty and Maya.

ALTERNATIVELY, you can present Elise Deauxnim's Profile on the 2nd or 3rd statement prior to presenting the staff. This will show that Elise would never attempt to kill Maya, as she is her own daughter. However, Godot will simply write it off as domestic violence. While this will redirect you back to Iris' testimony, you will not have to present that fact to the judge later.

Present Elise's Autopsy Report on the 4th statement. If Misty had her back at the lantern, then Maya would have stabbed her in the front. However, the autopsy report says that she was stabbed in the back, so if Misty's back was covered, then it would have been impossible for Maya to stab her in the back!

Godot now argues that the garden was pitch black and too dark for Iris to see the crime being committed, as none of the lanterns were lit. Godot will present the Stone Lantern, which will be added to the Court Record. Shoot! He just blew off the contradiction with some explanations.

The Judge will note the blood written on the lantern. Godot reacts as a shock, as he didn't see the writing on it. Just what's wrong with his eyesight anyway?

Iris will now testify her role as the accomplice for the crime.

Press the 5th statement and ask About the tracks. Iris will say that she left the temple while it was still snowing. She went back after it stopped. When asked if this was important, say It's very important. A new statement will be added.

Ah ha! A contradiction! Present the Weather Data on the 4th statement. First of all, the snowed had stopped at 10:50PM, that's before the murder. And second, lightning struck the bridge, setting it on fire, five minutes before. Iris becomes shocked upon hearing this. How could she not know that the bridge was on fire?

Godot will again state that the contradiction isn't important, as two facts are still important, Misty's body was somehow carried across the bridge and Iris took her to the temple where she desecrated it. Godot wants you to explain how this all happened even though the bridge collapsed. One more testimony from Iris.

Godot presents the Dusky Bridge Photo, which is added to the Court Record. It looks like one of the wires are missing. 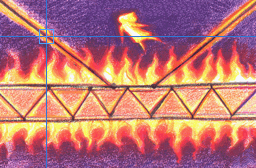 Present Larry's Sketch at any of Iris's statements. You tell them that it is Iris, flying over the bridge. It seems that Elise's (Misty's) brilliant and highly-gifted apprentice (Larry) has drawn the sketch based on what he saw that night, Iris flying over the bridge. Godot wants you to show that the sketch is important. Say that the sketch is a complete contradiction (for a moment of hilarity and no penalty, say the sketch depicts exactly what happened). Larry had drawn "exactly" what he saw, so the sketch contradicts with reality. You will now present the contradiction on the sketch. Present one of the suspension wires on either upper side of the screen (try the left one first, as the right wire may not work).

Godot wants proof. Present the Dusky Bridge Photo. In the sketch, the wires are above the bridge. In the photo, however, they are below! Your explanation? Laurice (Larry) was waiting for the love of his life to come to him. He fell asleep later by lying on his back! When lightning hit, he saw the figure fly "face up"! Your conclusion!? What Larry saw and drew was upside-down!

So therefore, Elise (Misty) wasn't flying over the bridge, she was swinging under it with a rope, just like a pendulum. Godot wants proof, as the rope has to be long enough and it had to be ready beforehand. You say that it wasn't possible as the rope was there from the beginning. When asked for proof, Present the Dusky Bridge Photo. One of the rope probably became loose from the fire, so the criminal probably tied it around Elise's (Misty's) body, and swung it over the river.

Godot wants proof of it actually happened. Present either Elise's Autopsy Report or the Crystal Sphere. When they did use the rope to carry Elise's (Misty's) body to the other side of the bank. The bank of the other side was 10 foot lower than the other side and as a result, Elise (Misty) fell 10 feet to the ground, resulting in the Crystal Sphere being knocked out of the staff. Also, the coffee on the face gag is here as well, to cool you down.

Godot will now ask you if the criminal swung the body to the other side of the bridge since no-one could cross it, who would have collected it on the other side? Present Iris's Profile. She was at the inner Temple after Bikini saw her with her bad back, however, she was seen at the Hazakura Temple at the time. So that means that Iris was at two places at once. The reason? The Iris at the Inner Temple isn't really Iris at all, as she didn't know anything about the burning bridge and the pendulum. If you saw her here, then the one at the stand isn't Iris at all.

This leaves one more question, who is this "Iris" on the stand right now? Finally, the moment of truth, Present Dahlia Hawthorne's Profile. But isn't Dahlia dead? She is but that doesn't mean she can't walk on the face of the planet anymore, thanks to the Kurain Channeling Technique. You explain that the channeling was all planned by her mother, Morgan. Someone had channeled her after 10:00PM, so The Iris seen at dinner and the one who gave you her hood was the real one.

Godot will now remind you that the real Iris was found at her room and was arrested as the "Dahlia" Iris was stranded at the Inner Temple. Was there any chances when they could have switched places, say There was one.... For several minutes, Iris went missing because someone set her free. When asked who, Present Miles Edgeworth's Profile. When he was alone with her at the Training Hall, an earthquake hit, causing Edgeworth to pass out. And since only Edgeworth was watching her, Iris had the chance to move freely and had enough time to switch places with her twin sister!

At this point, Iris has no point of hiding her true identity any longer and will reveal her true name... Dahlia Hawthorne, permanently retired. It has been a long time...