Still on trial, Dahlia will testify about her role at the time of the crime.

Press on all of the statements:

After pressing all statements, a new one will be added.

Those who remember the first and fourth episodes in this game will understand why. Present Mia Fey's Profile. 5 years ago, Dahlia was sentenced to death, thanks to Mia. Dahlia hated her since and wanted revenge. However, since Mia died, she thought it would be impossible to take revenge to the dead directly, so her next plan, to kill someone Mia loves dearly. In this case, her sister, Maya. That is why Dahlia took Morgan's plan to kill Maya, to get revenge against Mia!

Dahlia will say that she materialized at 9:30PM and went to the Inner Temple, carrying a staff with her, so it must mean Misty was channeling her. She finds Maya in the front of the lantern. She has no clear memory of what happened, but Dahlia knows that she was stabbed. Thinking it was Maya, she took the blood from her and wrote her name before passing out.

When she came about, she was stuck in the Sacred Cavern, thanks to the lock. She doesn't know if she killed Maya or not and swore not to go back into hell until it is truly confirmed.

She tried to get out but the lock was in the way. She tried to unlock it, but someone came in, probably Pearl? Two days later, she finally managed to open the lock, but police are everywhere, so she put the lock back in.

Just then, an earthquake, she spotted Iris all alone and thought they could switch places. When she heard everything, she thought she did kill Maya and is being channeled by Pearl. Dahlia doesn't think she killed Maya directly, but she suspects she committed suicide by jumping into Eagle River, upon learning that she killed her own mother. Does that mean Maya really is dead!?

And just when "Yes" is the most likely answer, Godot's phone rings. They told him they finally managed to unlock the locks and open the cavern. So, who did they find!? Iris... and no one else!

Before you start mourning, Godot asks you a question, did Maya really threw herself into the river with guilt? Godot doesn't think she did, in fact, it's impossible. When asked to prove his claim, Present either the Hazakura Temple Map, or the Dusky Bridge Photo. Since the bridge was gone, Maya could only have jumped off the Inner Temple side. And if she did, she could have landed in the rock shelf below, so if she did die by throwing herself in the rock bed, you would have seen her body in this picture.

Dahlia will now ask a question. Where is Maya now? You know she wasn't at the Inner Temple after the bridge collapsed and you have just learned that she wasn't on the rock shelf. This leaves one last possibility. When ask where Maya is now, say that she is in this very courtroom. How is this possible? Someone could be channeling Dahlia right now?. When asked who, Present Maya Fey's Profile. Pearl could be so, but she couldn't channel her, so she thinks someone else channeled her first. Choosing in the Inner Temple or In Hazakura Temple will obviously give you a penalty.

Even if Maya is dead, someone else other than Pearl doesn't have spiritual powers. 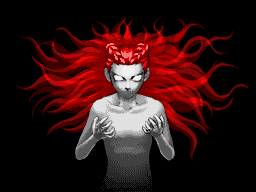 So you came into a conclusion. After Maya was attacked, she tried to run off, but the bridge was burning. She wandered where somewhere else would be a good place to hide. Maya eventually learned that the best place, was inside her attacker. She must have locked herself in the cavern in the training room and went to channel Dahlia, since without Maya, Dahlia would never find her as long as she is taking over her body.

Maya isn't quite a genius, so what gave her the idea to do something so savvy? That is when Mia comes in, channeled by Pearl. She says she gave Maya the idea. Mia reveals to Dahlia that Maya passed out around the same time as her. When Maya came to, she knew she needed help, so she wrote a letter and channeled Mia for advice. After reading, Mia knew that Dahlia mustn't wander free, so she tells Maya to lock herself in the cavern and channel Dahlia before Pearl does, because not doing so would be bad news for everyone.

Now watch as you and Mia emotionally destroy Dahlia's pride and taunting her for being eternally inferior. As a result, Dahlia will leave Maya's body and will leave to hell where she will live in despair for all eternity.

Now you finally know that Maya is all right. She passes out.

Now that SHE is taken care of...[edit]

The real Iris returns and Godot reminds you about "Miss Evil Spirit's" testimony. She says that she was going to kill Maya, but was stabbed in the back when she tried. So one question remains, who killed Misty Fey? Godot likes to call in Maya Fey to the stand as she was the one who witnessed the murder of her own mother.

Godot challenges you to figure everything out... without any help from Mia whatsoever. The Judge calls a recess.

Iris will tell you more about her history with Dahlia. She helped Dahlia with her plan 11 years ago, because she felt sorry for her. Her parents never cared about her, so Dahlia wanted revenge. At the last minute however, she ran away from her. This resulted in the case 6 years ago. Two people were suspicious, Mia and Diego Armando (thought you forget about him). One day, Dahlia poisoned Diego, and tried to hide the poison by giving it to you. She never got it back, which also resulted into a case where she lost in.

You ask Iris one more question, did Iris really take the body to the temple? Iris says she has, because she did everything someone on her phone says. She went to the bridge, but it was burning, so she caught the body and took it to the temple and cleaned the blood off the blade. Victim's Staff will be updated in the Court Record. Iris refuses to tell you who the caller was and leaves for questioning.

Mia will come and tell you that Maya is physically fine, but is emotionally scarred to the fact her mother just died. Mia will tell you Maya will be fine and is strong enough to testify. She will leave you to find the truth alone.

Since the caller was still at the Inner Temple after the crime, you will have to find who the caller is and find out who killed Misty... all by yourself!