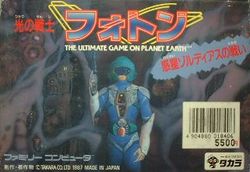 Photon: The Ultimate Game on Planet Earth is the English title for the Japanese game known as Hikari no Senshi Foton (光の戦士 フォトン 惑星ゾルディアスの戦い, Hikari no Senshi Foton Wakusei Zoldias no Tatakai?, lit. Light Warrior Photon Planet Zoldias Battle). It is an adventure game developed for the Famicom by Takara, and published in 1987. The English name of the game has special significance, since "Photon: The Ultimate Game on Planet Earth" is also the name of the first commercial version of a game commonly known today as Laser Tag. However, besides the name, and the fact that you play a character who fires a Photon gun, any further connection between the live action game and this video game is unknown.

In the video game, you play a soldier who must navigate through several different floors of a dungeon which contains items and traps. The player must figure out how to maneuver through the dungeon in an effort to collect various items that will expand his ability to search, and find various disks which contain hints and messages to further aid the player. The game is played from a third-person behind-the-shoulder perspective and contains pseudo-3D visuals. This game was never released outside of Japan. However, in 2003, a ROM translator by the name of KingMike released a patch which translates this game into English. It can be downloaded here.