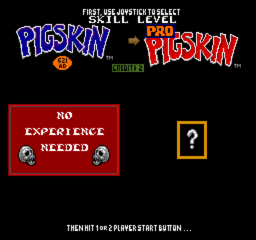 Once you have inserted your coin(s) into the cabinet of Midway Games's 1990 American football arcade game Pigskin 621 AD, the game will proceed to that start screen shown above; once you have pressed either Start Button, you shall have five seconds, to choose between Pigskin Mode (described as "NO EXPERIENCE NEEDED! BRUTAL...RELENTLESS...OFTEN FATAL! THE TOUGHEST GAME YOU'LL EVER PLAY!"), or even Pro Pigskin Mode (which is described as for "EXPERIENCED PLAYERS ONLY! (even worse)"). Once you have made your choice you shall be treated to a short cutscene which introduces Thor, Atilla and their unnamed teammates, along with the game's controls - and the match will then start outdoors as a spectator blows his horn, Thor says "LET'S GO!" from the HC-55516, and kicks the ball into the air, and the game's first main theme starts to be heard from the Yamaha YM-2151 as the timers on both sides of the screen start counting down from 3:30. The screen will then cut to a close-up of the field; if either of the team captains is off-screen, the text "LEFT PLAYER" or "RIGHT PLAYER" will appear with a blue (or red) arrow pointing to the left or right side of the screen, to indicate their position. When a member of either team reaches his opponents' end zone, with the ball, the screen will either cut to a shot of one of the other team's members holding a banner saying "NO MORE MISTER NICE GUY" or one of that team's members holding a banner saying "6 POINTS" - and if your team stays in possession of the ball long enough, the "POSSESSION" meter under the score display will fill up completely blue (or red), and earn one extra point. Obstacles which must be avoided include stone walls, bushes, mud puddles, trees, signposts, pools of water, rocks (indicating the 50- and 25-yard lines), twigs, skulls, logs, tree stumps, haystacks, banners, skeletons, barrels, crates, shields, and treasure chests; Thor and Atilla may also pick up the weapons (axes, maces, nooses, scythes, spears, swords and torches), and use them upon each other's teammates to temporarily stun them. At the end of the first period, the screen shall cut to a shot of an executioner (standing in the equipment room), who shall speak the following text:

The game shall then resume, as the aforementioned spectator blows his horn to indicate the start of the second period; at some point during this period, one of the losing team's teammates will pay off another spectator (who looks like the first one) to strike out at the winning team's members with his staff, but they can leap on him from behind to temporarily stun him. At the end of this period, the executioner will be at the concession stand and he'll say this:

WANT TO
THROW A
PERFECT
PASS?

HOLD PASS
BUTTON DOWN
TILL DESIRED
ACTION IS
DISPLAYED

The game will then resume again as the horn-blowing spectator once again indicates the start of the third period (which changes the setting to indoors); obstacles which must be avoided now include: barrels, crates, shields, treasure chests, bookcases, chairs, tables, statues, trap doors, buckets of water, pillars, rocks (again, indicating the 50- and 25-yard lines), skulls, banners, stocks, pools of water and staircases. The songs you will be hearing from the Yamaha YM-2151 will also have changed - and, at some point during this period, the crowd will also shout "SEND IN THE TROLL!" as one of the losing team's teammates is substituted with a Type 1 Troll. At the end of this period, the executioner will be standing by the losers' lockers and he will say this:

PLAY AS
IF YOUR
LIFE
DEPENDED
ON IT!

The game will then resume once again as the horn-blowing spectator yet again indicates the start of the fourth period; at some point during this period, one of the losing team's teammates will pay off a Type 2 Troll, who'd been watching the match, to substitute for him. This means that both teams could have one Troll on them, or one team could have two - and at the end of this period, the text "GAME OVER" shall appear on the screen. The number of goals scored by, injuries inflicted by, and Pigskin possession of both players will then be displayed on the screen; if the winning player is one of the ten highest-scoring players, he will get to enter his initials on his respective side's high-score table. Once he has done so the game will go back into attract mode - and it's also worth noting that when this game was new in the arcades it was possible to acquire a "Pigskin Player's Handbook" containing tips, tricks and strategies by sending a free self-addressed stamped envelope to "Pigskin", P.O. Box 1000, Plano, Illinois 60545 (but this offer is long gone).

Note: After a certain amount of time has been played in the current match (depending on what the arcade operator has set the "Game Time" setting to), the text "VIDEO TIME OUT! INSERT COINS TO CONTINUE..." shall appear at the top of the screen and you will have fifteen seconds to insert another coin to continue the game; in the case of two-player games the text "A TWO-PLAYER GAME IN PROGRESS! INSERT X COINS TO CONTINUE..." (X being the number of coins needed for a credit) will appear at the top of the screen once you have done so, and once you have paid for a second credit, the text "GET READY! PLAY CONTINUES IN 03 SECONDS" will appear at the top of the screen, as the number counts down to 00 and play resumes. This will happen seven times in a match - but it can be prevented by paying for seven (fourteen for a two-player game) credits at the start of the game.