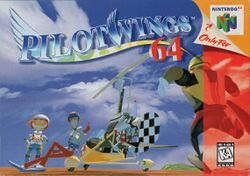 Pilotwings 64 is a game for the Nintendo 64. It was released along with Super Mario 64 as one of the two launch titles in 1996. It is a sequel to the Super Nintendo Entertainment System game Pilotwings, which was also a launch title for its respective game system.

In Pilotwings 64, as with its predecessor, the player must complete a variety of missions using different airborne vehicles. Examples include destroying various ground targets within a limited time using a missile-equipped gyrocopter, navigating through large floating rings placed throughout a city using a rocket belt, taking a picture of a smokestack while riding a hang glider, and firing a chosen character out of a large cannon towards a target several hundred yards away. For each mission, points are awarded based on time, damage, fuel usage, accuracy, softness of landing, and similar criteria.

The game also places a large emphasis on exploration, with detailed, object-dense environments and a special mode whose only purpose is exploration, the Birdman mode. Many interesting quirks can be found in the landscapes of the game, including a creature based on the Loch Ness Monster, representations of other Nintendo characters, and other such things. Its soundtrack was also praised, particularly the jazz piece played during night missions, or during flight as the "Birdman."