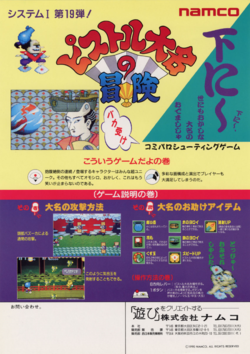 Pistol Daimyo no Bouken (ピストル大名の冒険, lit. Pisutoru Daimyō no Bōken, also known as Pistol-Shogun), is a horizontal scrolling shooter arcade game that was released by Namco in 1990, only in Japan; it runs upon Namco's System 1 hardware, and is the last game from the company to have two players alternating turns at the controls (save for the carbon copies of: Puckman, Rally-X, New Rally-X, Galaga, Dig Dug, Xevious, Mappy and Super Xevious that were released in 1995 and 1996 as part of the compilations Namco Classics Collection Vol. 1 and 2). It was also a spin-off from Beraboh Man, as the main character (the eponymous "Pistol Daimyo"), had first appeared in that game as a boss on the eighth and twenty-second stages to set up an invisible wall in front of him, taking 11 hits to defeat.

As mentioned above, the player must take control of Pistol Daimyo, a small Japanese lord, who has a pistol strapped to his head and two fans strapped to his feet; he faces the right side of the screen and is always moving forward with the backgrounds scrolling to the left, bringing enemies into view (which are reminiscent of Monty Python's Flying Circus). Similar to Kissy, Takky, and Hommy from Baraduke and Bakutotsu Kijūtei, he will float down to the ground if you stop holding the joystick up while he is in mid-air - and pressing that Firing Button will make his pistol fire a small cannonball. However, holding down the button will charge the pistol (much like Alice's bubble blower in Märchen Maze and Apollo's sword in Phelios), and upon releasing the button the pistol will fire a medium or large cannonball; but even the smallest enemies take multiple hits to kill, so the small cannonballs are of little use. There is also blue (and yellow) vases which can be broken open with a medium (or large) cannonball, and will leave Hanafuda (花札) cards behind, for Pistol Daimyo to collect - and once he has collected three of them, it will cause a Kusudama (くす玉) ball to come down into view from the top of the screen (which can also be broken open with a medium or large cannonball). If he manages to do that before it goes back up off the top of the screen again, it will leave a suit of wooden (or metal if you already have the wooden one) armour behind; once he has put it on, it will prevent him from being killed in a single hit.