Pitfall: The Mayan Adventure/Table of Contents 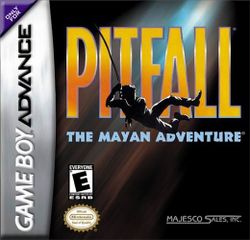 An extra feature in all versions is the ability to play the Atari 2600 version of Pitfall! after finding a secret doorway. The doorway can be found by looking for something that seems out of place. The Mega-CD, 32X and Windows ports contained extra (and expanded) levels and other enhancements over the earlier versions. The Windows port was based on the Mega-CD version, and made using Kinesoft's Exodus game technology, which was later used to make the Windows port of Earthworm Jim: Special Edition.

In this game, the player takes the role of Pitfall Harry Jr., son of the hero of the original game, who has to find his kidnapped father.

Pitfall: The Mayan Adventure/Table of Contents