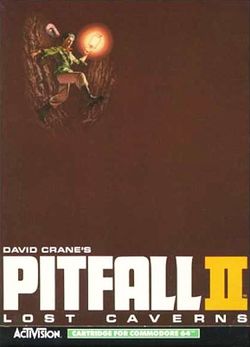 Pitfall II: Lost Caverns is a platform video game originally released for the Atari 2600 video game console in 1984. It is the sequel to the popular Pitfall!. Both games were designed and written by David Crane and published by Activision. The star of the games is Pitfall Harry, an 8-bit jungle explorer.

"Join Pitfall Harry as he searches a vast subterranean cliff dwelling high in the Andes. He's looking for the fabled Raj Diamond, gold bricks, his niece Rhonda and the cowardly lion Quickclaw. He finds more than he bargained for - eels, poisonous frogs, albino scorpions, bats, condors, a raging river - in the greatest challenge of his career!"

The game takes place in the caverns of South America. Harry fights his way through the caverns in order to find bars of gold and his friends who are trapped in the caverns as well. The game is different from Pitfall!, because Harry is not timed and has no lives. If he is hit by an enemy, he will float back to his check point and lose some points as he floats back. Also, the game does not have side-scrolling. Instead the screen changes once the player hits the edge.