Commanders appears in all stages except the Dark Crystal Palace. When you pass through specific points along each stage (twice in the Pantheon Era), lightning bolts fall from the sky. If you touch one, or are struck by one, you will be sent to a screen where you must fight a Commander. Commanders will get progressively stronger as you fight them from one stage to the next. If it happens that you do not want to get struck by lightning, it is recommended that you fire your boomerangs as rapidly as possible, since they can cancel out the lightning bolts.

All Commanders behave similarly. They fly to the left and right in the sky at first. They toss lightning bolts down to the ground at Pocket Zaurus. After taking a a number of hits from your boomerang, they will begin to descend to the ground. Once on the ground, it will resume moving left and right along the floor this time. When they are outside of the range of your boomerang, they move slowly. As soon as you can hit them from where you stand, they begin to rush, and will continue to rush until they are outside your range again. You will have to jump over them as they head your way.

Commanders are immune to the effects of the Flash attack, so you must rely on your boomerang. Each bolt of lightning can be destroyed by your boomerangs for 50 points. If you defeat the Commander, you are awarded 5000 points. 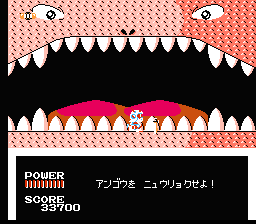 Enter the code after each boss battle

When you defeat each Commander, four letters are displayed on the bottom of the screen (as shown to the left). These codes are meant to be input at a particular time after each boss fight. If you successfully enter a code for each stage, you will be given a hint that helps you solve the mystery of the game. Each letter corresponds to an input on the controller. A and B refer to

respectively, while U, R, D, and L refer to each direction on the control pad,

The codes are always the same for every stage. Since they never change, you can enter the code for a stage even if you did not fight the Commander, and you will still be shown the hint.

The hints can be fairly cryptic, so the manual comes with five crossword puzzles you can solve in order to get a second hint that explains how to interpret the one you got from the game. However, even the secondary hints will not explain how these hints need to be applied. This is the true Riddle of the Swords of the Ten Kings, and is explained in the spoiler below:

Reveal
Each hint explains what to do with the sword you win from defeating that stage's boss. In order to figure out which colored sword you won, you will need to get a Game Over and challenge Salamander every time you beat a new stage and get a new sword, then note down which new sword just got added to the Salamander fight.