Hashimoto-Zaurus starts out as a mild mannered dinosaur version of a bookworm, complete with a pair of glasses, a bow tie, and a monogrammed shirt with a big H on the front. Hashimoto can run left or right, jump up and down, and toss boomerangs with surprising effectiveness. However, when Hashimoto manages to find the Super Shield, positioned somewhere in each stage, he will transform into Super-Zaurus, as shown to the right. Super-Zaurus can toss boomerangs faster, and throw up to three of them at a time. Hashimoto has a health meter that drains as he gets hit, and if he is wearing the armor, he will lose it when the health meter reaches only two bars. Hashimoto can regain energy by collecting the H marks, finding the Super Shield, or whenever his score reaches a multiple of 30,000 points. 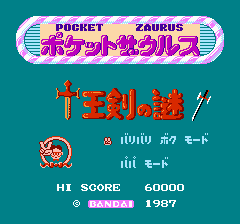 Before you start a new game, you must select from one of two modes. The top mode is "Baribari Boku" mode, while the bottom mode is simple "Papa" mode. It may seem counter intuitive, but "Papa" mode is actually the easier of the two (Baribari is a term to describe hard work.) In "Papa" mode, the Drakkura creature will not appear from the Botoranodon capsules, and you will not receive damage by falling in water or lava (but only for the first stage.) Further more, all attacks do a decreased amount of damage.