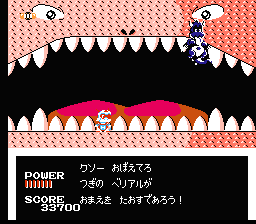 After the first boss fight, the next stage is random

While the first stage is predetermined, and will always be Dinosaur Island, the next three stages are chosen at random. Stages 2, 3, and 4 will be the Haunted World, Future City, and Egypt Land in an random order. There is no change in difficulty, regardless of when you encounter each stage. Once you clear the fourth stage, you will always arrive at the Pantheon Era for the fifth stage, where you will fight against the final boss once you complete the stage. 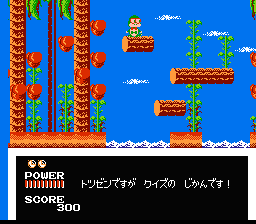 When you arrive at specific points in the game, you will trigger a pop quiz. Some pop quiz locations can be avoided while others are mandatory. Before you are shown the question, you will see how many points the successful answer is worth, 1000, 3000, or 8000 points, chosen at random regardless of location or the question that follows. If you answer the question correctly, you are awarded the indicated number of points. If you don't answer the question, you suffer no penalties. Other than boosting your score closer to the next 30,000 point energy recovery, quizzes have no other benefit.

Since the game is in Japanese, translations of the quiz questions and answers have been provided here. 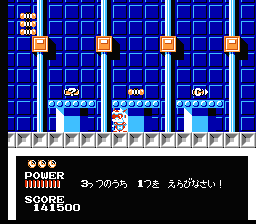 At various points along certain stages, you can enter Safe rooms for the cost of one diamond. In these rooms, you will find three items, but you will only be given the opportunity to collect one of them, so you must choose which one you want. While you might finding something useful like a continue or a 1-up, the truth is that diamonds are far too useful in the game to used in this fashion, so it is often better to hold on to the diamonds rather than using them up to enter Safe rooms. If you have a large abundance of diamonds, than it may be worthwhile to increase the number of Flashes that you have. 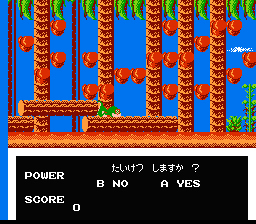 When you die, you are offered a chance to take on the boss

When you lose your last life, you are actually give a rare opportunity as far as most video games go: You are asked if you would like to take a shot at defeating the final boss. If you press