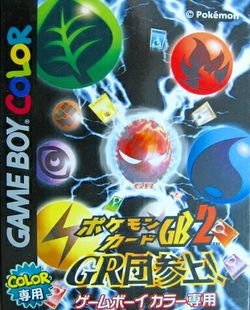 Pokémon Card GB2: Team Great Rocket is Here! (ポケモンカードGB2 GR団参上！, Pokemon Kādo Jī Bī Tsū Gurēto Roketto-dan Sanjō!?) is the second videogame based on the popular Pokémon Trading Card Game. It is a Game Boy Color game (although it can be played on a non-colored Game Boy system) and a sequel to the first game. It features characters from the first game, as well as a second island to travel to that expands on the first game, with a focus on the Team Rocket expansion. The game was the second in the Pokémon series to allow players to choose the gender of their character after Pokémon Crystal, which features the returning male protagonist name Mark and a new female character name Mint as an alternate protagonist. The game was never released outside of Japan.

This game contains every Japanese card released through the Team Rocket set, including some Japan-only promotional cards, and the "GR's Mewtwo" promo card.