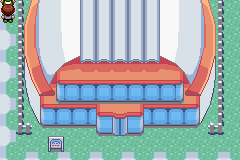 After five and ten tournament wins (single battle only), the trainer can fight Dome Ace Tucker. He surrenders the Silver or Gold Tactics symbol, depending on whether this is the trainer's first or second time to come across him, respectively. He wields a team of Pokémon that counterbalance each others' weaknesses, to take advantage of the two-Pokémon only rule.

Tucker's name is from tactics, the thing the Battle Dome tests.