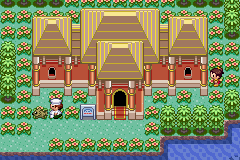 In the Battle Palace, the trainer plays a standard, single three-versus-three battle. However, the trainer can't decide which attack their Pokémon uses. Depending on their nature, they will like certain kinds of moves (offensive, defensive, or supporting). The attitude of the Pokémon may change if their health is low.

Spenser's name comes from spirit, which the Battle Palace tests.