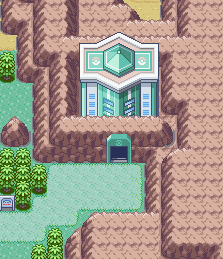 The trainer hill functions in the same way as the trainer tower in FireRed and LeafGreen, except that there are only four floors instead of seven. It is only found in Pokémon Emerald. After defeating the Elite Four, it opens up and can be found North of Mauville City. There are four tag matches:

Each type is harder than the previous one. Your opponents Pokémon level will always be at the same level as the highest level Pokémon in your party. At the end, you can get marvelous prizes, including a Great Ball, but it depends on your time.