You can enter the cave from Violet City, Blackthorn City, Route 31, Route 45, and Route 46. You'll need Flash to light your way through the cave and Rock Smash and Surf to find all of the items inside. While there are a lot of fabulous items inside the cave, including TM 13, you don't have to enter. 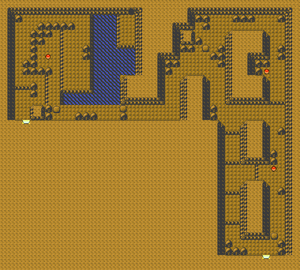 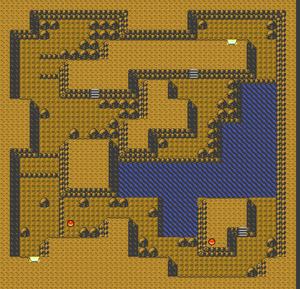 The Dark Cave connects Route 31 with Routes 45 and 46, in Johto's East. But unless you know Flash, Strength, and Surf, you can't use it to go anywhere. You can, however, sneak in very early on in the game and catch some rare Pokémon as well as pick up a Potion.

In Gold and Silver, you can hang around for a bit until you spot a Geodude. You'll have many opportunities to catch this Pokémon, but you may prefer to do it early since Ground/Rock-type Pokémon are particularly useful against the Flying-type Pokémon in the Violet City Gym. You can also snag a Zubat.

If you're playing Crystal instead, this cave remains an opportunity to catch a Geodude and a Zubat, but that's hardly worth the trip. It's the level 2 Teddiursa, which only appears in the morning, that is most exciting. Cowardly Teddiursa tend to run away immediately, so you may need Gastly to use Hypnosis or Mean Look to keep it from bolting. If you carefully raise Teddiursa from a cub, it will become a very powerful Ursaring at later levels.

If you're extremely lucky, you may also run into a Dunsparce. This is the only place you can find this Pokémon, but the odds of catching one are extremely low when they're not "swarming". To find out when this happens, you'll need to give your phone number to the only trainer on Route #33.

If you smash a rock, you may encounter the following: