The S.S. Aqua takes Pokémon Trainers from Olivine City in Johto to Vermilion City in Kanto. The boat ride is relatively short, but you'll still have time for a little adventure at sea. Pop into all the rooms—you can gain experience with Pokémon battles, and you'll find some good items, too.

When the credits finish rolling, you'll find yourself outside your home in New Bark Town. Unlike the first time you visited the town, as soon as you head inside, you'll get a call from Professor Elm. He has another reward for you, the S.S. Ticket. Fly to Olivine City, visit the dock and talk to the people there. The last person will ask to see your ticket and show you to the boat. Hop on board for a short voyage to Vermilion City in the new region of Kanto. After your first boat trip, the boat will only operate on certain days. 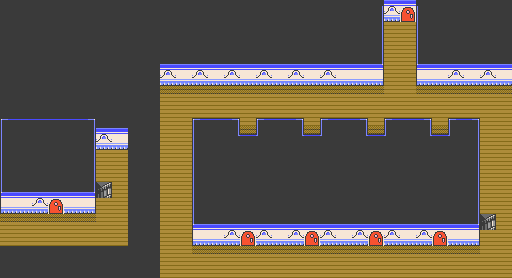 The Professor has you traveling in style—a private room! Located in the upper-left corner, it has a PC, and you can heal here too. This ship is full of trainers, but they're much easier than the opponents you just faced in the Indigo Plateau, so you may want to take the opportunity to break in some new Pokémon.

A lost child & a shirking sailor[edit]

After you board, you'll be approached by a man looking for his lost granddaughter. It seems she went downstairs, but there's a guy blocking the way, and he won't let you wander around the lower deck until you've rounded up his buddy. You'll find the sailor in the room to the right of yours. After the lazy sailor mutters an excuse for sleeping on the job, he'll get back to work and his less lazy buddy will let you pass.

With the sailor's friend gone, you can head up to the Captain's room. The old man's granddaughter is in the room harassing the Captain. Escort her back to her father, and he'll reward you with a Metal Coat, an item that powers up Steel attacks and is required for evolving Onix and Scyther. After you've completed the search for the girl, you'll see an announcement that the boat has arrived at Vermilion City.

After your initial voyage to Vermilion City, the boat will only set sail from one port to the other on certain days. You can travel from Olivine City to Vermilion City on Mondays and Fridays, and you can do the trip in the opposite direction on Wednesday and Sundays. Depending on the direction of the trip, you will encounter a different set of Trainers on board the ship.