Pokémon Gold and Silver/Lake of Rage

Strange things are happening at the Lake of Rage. Gyarados are taking over the waters, which were once packed with Magikarp. Team Rocket is at it again! 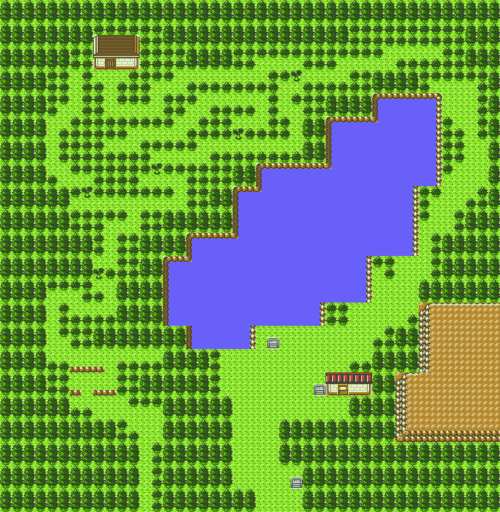 You don't need to capture this Gyarados to proceed, but you do need to battle it, so you might as well. After all, when are you ever going to see another Shiny red Gyarados? Save your game, then surf up to the Gyarados floating in the lake. Whether you capture it or K.O. it, you'll get the Red Scale when the battle is over. Take this to Mr. Pokémon way back on Route 30 and he'll swap it for an EXP Share. After you defeat Team Rocket, return to the lake to find new trainers who will appear for you to battle.

This may be many players first introduction to Shiny Pokémon, which are incredibly hard to come across in normal Pokémon hunting.

When you make it back to the shore, you'll meet Lance, the elite Dragon trainer that Red defeated in Red/Blue/Yellow. He isn't here to start trouble, but to stop it; follow him to the item shop in Mahogany Town and battle Team Rocket together.

When Team Rocket in Mahogany has been thoroughly defeated, come back here and check out the sign outside of the cabin in the southeast corner of the lake. If you can fish up a bigger Magikarp than the record it lists, you can collect a prize from the guy in the house: an Ether (Gold/Silver) or an Elixir (Crystal).

The western path to the lake[edit]

Take the west exit out of Route 43 to the Lake of Rage area, and you'll arrive at a man's house. He'll give you TM 10 (the very odd Hidden Power move). Continue east for TM 43 (Detect).

Wesly, the man in the corner of the Lake of Rage, below the house, only comes out on Wednesday. He'll give you a Blackbelt, which powers up Fighting-type tehniques.

Reminder: Trainers only appear after the Rockets are cleared out.