The large building in Lavender Town houses a Radio Station, and the smaller building nearby is a memorial for the souls of departed Pokémon. The Radio Station isn't working because the Power Plant isn't operational. 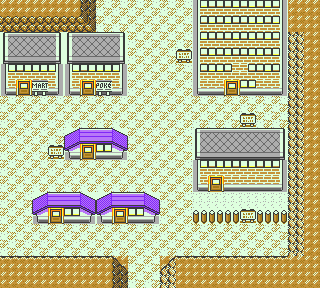 With the power down, the Radio Tower here is out of commission. To be the sound's salvation, you need to get the Power Plant up and running. If you come back when the power's restored, the Radio Station's head honcho will thank you with a new Radio Card that lets you listen to Kanto's radio programs.

So they turned a tower built for the purpose of honoring dead Pokémon into a radio tower? That may seem a bit tacky, but Lavender's economy probably needed a boost. You can visit your old friend Mr. Fuji at the newer, smaller mausoleum below the tower.

If you need to rename your Pokémon, you can come here and save yourself a trip to Goldenrod City. As always, you can't change the names of Pokémon you received in trades.