You have defeated Chuck for the Storm Badge since you were required to visit Cianwood City before you could earn the Mineral Badge, but now that you've obtained the Special Medicine (and Fly), don't forget to head back to Olivine City, and help the sick Ampharos in the Lighthouse, in order to challenge Jasmine. 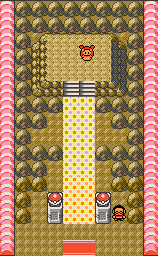 No puzzles, no tricks, no Junior Trainers... Just Jasmine, two Magnemites and a big angry Steelix. Steel is vulnerable to Fire, Fighting, and Ground. A pure Ground Pokémon would be especially great here, since it would also be protected from Magnemite's electricity. But if you don't have a good one at this point, try using your best Fire Pokémon, a Machop, and any Water Pokémon. Water is weak against Magnemite, but great against part-Ground Steelix, who is the real threat here. Speed is even more critical in Crystal, since Jasmine may use hyper potions.

After you defeat Jasmine, you'll receive the Mineral Badge and Iron Tail (TM 23).

Now that you have Surf, Strength, and Fly, it's a good time to do some backtracking and pick up a few items and Pokémon that we couldn't get to before. Remember that all of the items in the list below are optional.