Team Rocket supposedly disbanded three years ago, but it seems they're back! They're conducting a cruel experiment that is filling the Lake of Rage with Gyarados. After you capture or defeat the red Gyarados, a Trainer named Lance will ask for your help against Team Rocket.

Team Rocket was behind the mutated Gyarados all along, and Mahogany is a front for their underground plant. If you follow Lance into the Item Shop and down the stairs, you can challenge Team Rocket's leaders and drive them away. 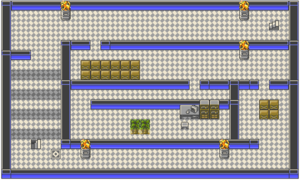 Whenever you pass one of the gold Persian statues, a pair of Rockets come dashing out to attack. You can't avoid these fights, and you'll fight the same two Rockets every time (but only the first time you pass each statue).

However, you can avoid fighting them altogether. Head down into the room in the center of the floor, and use the computer to turn the security system off entirely.

The off-color floor on the left side is full of pits that force you into fights with Voltorb, Koffing, and Geodude. Like any other fight, you can capture or K.O. the Pokémon, but they won't be back the next time you pass over that same exact tile. Or skip the traps entirely by taking the long way around. 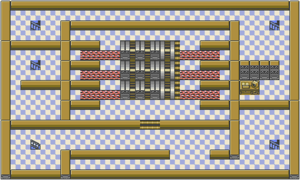 Lance is waiting for you when you climb the first set of stairs, and he'll happily heal all of your Pokémon, this one time only, before you move on.

Shut down the plant's power generator[edit]

You won't be able to access the large doors near the bottom of Level 2 until you obtain the password from the Murkrow in the Rocket's boss' room on Level 3. Once you do, come back here and save your game; a pair of Rockets will be waiting. After you defeat them, team up with Lance to fight the Electrode that are powering the transmitter that has turned all of those poor Magikarp into Gyarados. The Electrode are fond of Self-Destruct, so you'll need at least three Pokémon that are still in fighting shape.

When the Electrode are gone, the Rockets will disappear from Mahogany, and Lance will reward you with HM 06 (Whirlpool). At this time, return to the Mahogany Town gym and battle Pryce for the Glacier Badge before you continue on your journey. 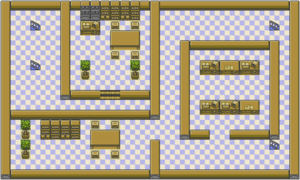 Security systems are only as strong as the people who know the passwords, which in this case isn't very strong at all. To get the codes to open up the Team Rocket chief's office, rough up the trainer in the lower left corner of this level, as well as the trainer in the upper left corner of the small computer room within the right side of the building.

After you get the passwords, you can reach the commander's room by climbing back up to Level 2 through the upper right staircase, crossing Level to the left, and climbing back down the upper left staircase. This guy's Raticate can be tough, so make sure your Pokémon are in fighting shape before you even enter the room. Once you've bested him, talk to his loose-lipped Murkrow to get the password for the Generator Room in the middle of Level 2.