Routes 45 and 46 are built into a mountain, so you will be traveling downhill. You can't walk back up, but you can fly. There are many good items scattered along the routes. Make a few trips to pick them up.

After completeing the events in Blackthorn City, you should have gotten a call from Professor Elm summoning you back to New Bark. You can Fly, but you might wish to walk instead, since the direct path of Routes 45 and 46 give you the chance to capture two new Pokémon, and revisit the Dark Cave.

Take the far-left path down Route 45 to talk to Parry. For some reason, this guy is following the Pokémon situation way over in Mt. Mortar. Trade phone numbers with him, and he'll give you a call when the Marill Pokémon are swarming over there. You can take the other paths to face the other Trainers and pick up items by flying back up to Blackthorn City, and then taking different paths back down.

Grab some items from the Dark Cave[edit]

With Flash, Surf and Rock Smash, you can now fully explore the Dark Cave which you last visited when you passed through Route 31. If you enter the cave from Route 45, you'll be able to catch Wobbuffet and Teddiursa, and pick up two cool items: the Black Glasses that strengthen Dark-type moves, and TM 13 (Snore). 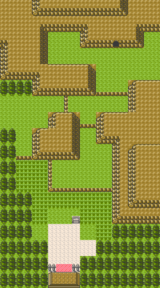 Note that the other end of the Dark Cave is here, but you cannot reach it from the Route 29 end, only from the Blackthorn City and route 31 after Surf and Rock Smash (crystal) have been learned.