You'll see Kurt as soon as you enter the well. He's hurt his back and can't continue, so you must take on Team Rocket alone. You won't be able to explore the well completely until you know Surf and Strength, so you'll need to return to the area later.

Big trouble at the bottom of Slowpoke Well[edit] 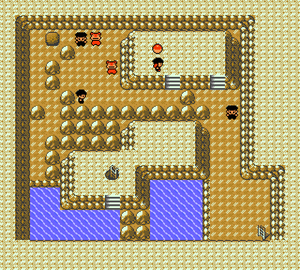 Kurt cleared the way, but now you're the one who has to do the dirty work. To save Slowpoke, you'll need to defeat the upper left Team Rocket member and his single level 14 Koffing. If you win, the Rockets will vanish, but you still won't be able to proceed any farther in the Well without Strength (HM 04) and Surf (HM 03). The lower Slowpoke is carrying a message that you can intercept.

The spawn rate for Wild Pokémon is very low in this area, 10-15% so Repels aren't always needed to avoid Wild encounters. 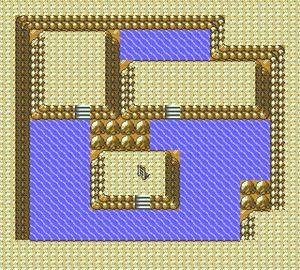 Return later on for valuable items[edit]

Once you have Strength and Surf, you can access the ladder to the basement level of the Slowpoke Well in the lower left corner of the first floor. Down there, you can find a TM 18 (Rain Dance) which isn't that great. But the King's Rock is all that and more. When held, that Pokémon's attacks get a small chance of making an opponent Flinch and lose their turn (so give it to a speedy Pokémon). And if it's equipped by a Poliwhirl or Slowpoke, when traded, that Pokémon will evolve into a new form.