The magical Sprout Tower is rumored to have a giant Bellsprout stalk as its center column. Many monks devoted to Grass-types train in Sprout Tower, but you should be able to handle them. You may want to use the Escape Rope to leave the tower, or you can climb down. Sprout Tower is an optional side mission only required for obtaining Flash. 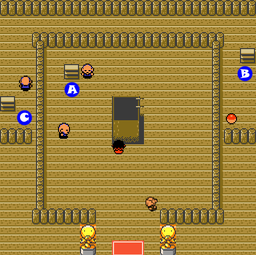 The tower is fairly easy if you arrive during the morning or day, since the only random encounters you'll have to deal with are Rattatas. At night, Gastly join in the fun, and their immunity to Normal-type attacks can be a problem if you don't have a Pokémon with a different type of attack, like Bellsprout's Vine Whip or Onix's Rock Throw. On the plus side for Crystal players, this is a great opportunity to catch one, since they appear more frequently here than they did on Route #31.

Virtually all of the trainers are packing Bellsprouts. If you chose Cyndaquil as your starter, you'll have no problem burning through them. Other players will want to use a good Flyer. Crystal players can pick up a Spearow from Route #46, which starts with Flying-type Peck, and Hoothoot can learn it at level 11. Pidgey's Gust, which it learns at level 9, is equally effective. 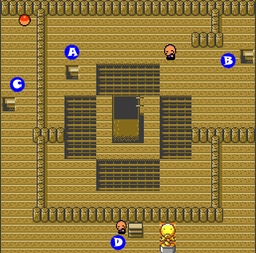 For Gold and Silver players, this will be your first chance to catch a Gastly. The usefulness of a lot of the new Ghost abilities is debatable, but Gastly is still a great Pokémon. Its Ghost-type nature makes it immune to Normal and Fighting-type attacks, but its real strength lies in its utility on the field. While its resistances keep it healthy, it can put wild Pokémon to sleep with Hypnosis, keep them from escaping with Mean Look, and whittle down their health with Nightshade (which doesn't get critical hits, and won't accidentally K.O. your quarry).

Getting one isn't easy. You have to come to the tower at night, and can only damage it with Type attacks like Rock Throw and Vine Whip. But it's well worth the trouble. 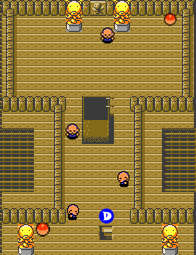 The third floor has several monks and their leader, the Elder. You will see your Rival briefly, but he leaves quickly. He thinks the Elder is weak. Defeating the final Sage will get you HM 05 (Flash, which is much more useful than it was in Red/Blue/Yellow), which will help you see inside dark caves. You need the Zephyr Badge to use Flash outside of battle. But the Sage is tough—while your Flying or Fire-type Pokémon can shred his Bellsprouts, and the Bellsprouts of all his underlings—you'll need an Onix or Geodude to deal with his vicious level 10 Hoothoot. There is an Escape Rope at the top right corner of the room, which can be used as a quick escape from dungeons, including the Sprout Tower.

Now your quest has truly begun! There are seven more badges in Johto alone, and the next will take us to secluded Azalea Town, in Johto's southern tip. The journey will be long, but does offer a variety of cool new Pokémon and interesting detours. Head south from Violet City to get started.