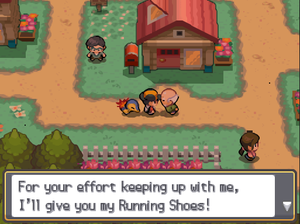 Hold B to run.

Upon entering Cherrygrove City, an old man will stop you and give you a tour of the city, but complains about how you can't keep up with him. The old man will show you useful locations around the city, including the Pokécenter, Poké Mart, and Ocean. As a token of his appreciation, he will give you a pair of Running Shoes. When you try and exit, he'll stop you again and load your Pokégear with a new card, the Town Map card. What a nice old man.

If the player's starter was Chikorita

If the player's starter was Totodile

If the player's starter was Cyndaquil

On your way back to Professor Elm's lab, at the east exit of Cherrygrove City, you'll encounter a trainer who appears to be in a hurry. This will be the first, but certainly not the last time you meet this opponent. While you may not know who he is now, this trainer will be your rival throughout the rest of the game. You'll be able to name him once you return to the lab. This is the same character you could see looking through Elm's lab at the beginning of the game, and coincidentally, he now has one of Elm's Pokémon. He chose the starter that exploits your starter's weakness, but thankfully, it doesn't have any of its -types attack, yet. Just keep attacking and if your Pokémon was healed before the battle, you'll win.