Gender is important for Attract move, Love ball, and breeding. In the top right, the number shows the opponent's level, which determines strength. The higher the level, the stronger the Pokémon is. Trainers spend a lot of time battling other Pokémon to raise their own Pokémon's level. HP stands for health points and shows how much damage the Pokémon can take. Once all of the HP is depleted, the Pokémon will faint. The bar will show the Pokémons condition it will be green if it's in good health, yellow once it's struggling, and red once it's in danger. A Pokémon's name, by default, is what Pokémon it is, but when facing other players, can be nicknamed. This helps you identify what you're fighting. When facing wild Pokémon, you'll see the Poké Ball symbol in the corner if you've already captured that Pokémon before. In between the HP and Poké Ball symbol, you'll see any status that's been inflicted on a Pokémon, ranging from the turn-delaying Sleep to the damage-inflicting Poison. 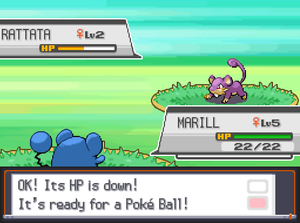 You should generally lower its HP a little bit more. 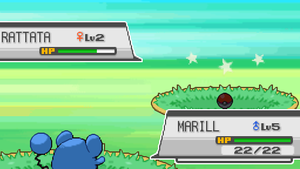 Stars and a darkened Poké Ball indicate that you've captured the Pokémon.

After you've delivered the egg to Professor Elm and left New Bark Town, you'll be given a tutorial on how to catch wild Pokémon by your friend. They'll show you that you should weaken the Pokémon until its HP is in the red or yellow, and then throw a Poké Ball. If you can, try giving the enemy a status, such as sleep, freeze, or paralysis. These will increase the odds of capturing it. Pokémon that have been caught at least three times and Pokémon acquired through trades will be easier to catch, as well. You cannot capture another trainer's Pokémon, and you cannot catch a Pokémon while in a double battle. After you've captured it, you'll have the option to nickname the Pokémon you catch. If you're party is full, the Pokémon will be transferred over to your in your most recent box.

The type of Poké Ball you use will also affect whether or not you're successful at catching a Pokémon. 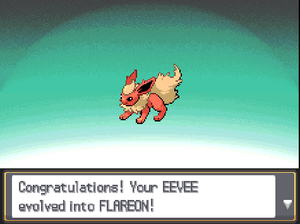 Flareon, after evolving from the evolution-type Pokémon, Eevee.

During the course of a Pokémon's development, under certain circumstances specific to that Pokémon's species, it may evolve into a different Pokémon. This change is not merely physical, however, as Pokémon of a higher evolutionary stage have different (and usually more powerful) base stats than their predecessors, may have different moves that can be learned, and sometimes change their types, though usually at least one of the types of the previous form is preserved. Other statistics, such as nature and EVs, as well as alternate coloration, are preserved.

Professor Rowan is the leading expert in Pokémon evolution. According to his research, over 90% of all Pokémon are connected to at least one other through evolution. Rowan is currently investigating whether evolution is a form of maturity in Pokémon, and looking at the implications this process has on legendary Pokémon, which don't evolve.

Most commonly, Pokémon that can evolve into more than one Pokémon will have the ways in which the evolution is activated being slightly similar, such as having both be by evolutionary stone or by holding an item and trading. Closely-related Pokémon, such as Nidoran♀ and Nidoran♂, will also have very similar, if not identical, evolution methods.

Some Pokémon have different evolutions depending on their gender. Usually, only one gender of the species will evolve, and the other will remain at the unevolved form. For example, only female Combee can evolve into Vespiquen; male Combee cannot evolve at all.

Perhaps the most well-known types of evolution families are those that feature two separate evolutionary events in the Pokémon's development. Indeed, this type of evolution family is what all of the starter Pokémon in the main series are a part of, excluding Pikachu

Several families, while also one- and two-evolution families, are also branch evolution families. What this means is that there is a split in the evolutionary line at some point so that even though two Pokémon of the same species evolve the same amount of times, they can become one of two or more entirely different creatures. Eevee is the best-known example of this, evolving seven different ways depending on the method used.

A major difference between the final forms of an evolution family with a branch in evolution is in the way that their base stats line up. For example, Kirlia evolves into both Gardevoir and Gallade, which both have 518 total base stats. However, Gallade's base stat in Attack is 125 and its base stat in Special Attack is 65. The reverse is true for Gardevoir, whose Special Attack is 125 and whose Attack is 65. This is true of many opposing evolutions, with one focusing in one specific stat, the other focusing in a separate stat, and both having the same total stats. This is especially obvious in the Eeveelutions, who each have exactly the same base stats, though organized differently.

Located in every town and city, as well as various other places, Pokémon Centers are the ones responsible for keeping Pokémon fit. Whether it be from fighting or other causes, any injury is treatable there. Visiting a Pokémon Center will revive fainted Pokémon, restore your Pokémon's HP and PP, as well as cure any status (Pokérus excluded). The PC is also located in the Pokémon Center. The PC allows for players to store Pokémon that aren't currently in their party for use later, as well storing items, and checking Hall of Fame records. In the basement and second floor of the Pokémon Center, there are areas where you can use WiFi to communicate, but these features are covered in the Wifi section.

Located in the largest cities or towns, Pokémon Gyms are tests for the Pokémon League, which you must pass before you can enter the League. The Gym Leaders are located inside. You must defeat these powerful Trainers to receive Gym Badges, which allow you to use HM moves outside of battle. Once you have collected the eight Gym Badges, you can enter the Pokémon League to challenge the Elite Four and the Champion.

[Go to top]← Pokémon HeartGold and SoulSilver | Getting Started | Controls →