There are many events locked inside the game that require special Pokémon or items to activate. Many of them require the use of wifi-exclusive items that can only be downloaded for a limited time. If you miss them, you'll need a cheating device, such as Pokésav or Action Replay to see these events. 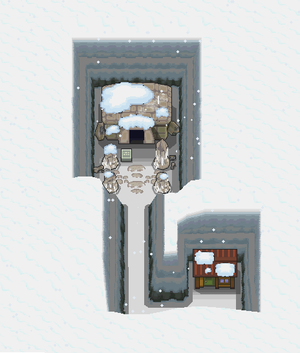 Combined culture of Sinnoh and Johto. 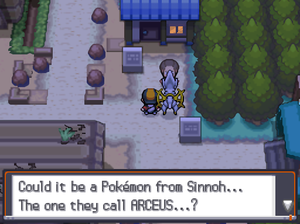 This event requires you to have an event Arceus, either the TRU Arceus acquired with Pokémon Platinum through WiFi, or the Hall of Origins Arceus obtained by using the Azure Flute, then traded to Pokémon HeartGold and SoulSilver. TRU Arceus isn't obtainable without trading with another player, but the Azure Flute has yet to be released.

The Sinjoh Ruins are a location in Pokémon HeartGold and SoulSilver. While it is not a part of any known region, it can be visited by way of a mysterious entry point in the Ruins of Alph.

The only known way to the Sinjoh Ruins is by way of the Ruins of Alph. Bringing an Arceus from a Nintendo event here will unlock the new area, but this will only occur if the Arceus is currently the player's partner Pokémon. Cynthia will be found waiting for the player, and will tell them that Arceus has the ability to create newborn Pokémon. She will escort the player into the ruins and show them an area called the Mystri Stage that is linked to Arceus's power of creation. The player will get a choice to obtain only one of either Dialga, Palkia, or Giratina at level 1, equipped with their respective orbs. Arceus must be the only Pokémon in the player's party for this to occur, and a PC is inside the cabin near the ruins for the player to use to deposit all others. 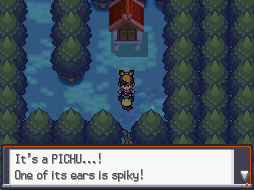 She appears in Pokémon HeartGold and SoulSilver as an event Pokémon obtained in Ilex Forest. She will appear and join the player's party if the Pikachu-colored Pichu is brought to the shrine as the first Pokémon in the party. She has her own unique in-battle and overworld sprites and cannot evolve or be traded outside of HeartGold and SoulSilver. Aside from her unique sprite, moves, and inability to be traded or evolve, she is identical to a normal Pichu in terms of stats. Her maximum stats for the Pokéathlon are different from a regular Pichu. Interestingly, however, her base stats do not differ from a normal Pichu's; the same trend occurs with most other Pokémon with multiple forms which share their base stats, such as Rotom or Arceus. If a Pokémon uses Transform on it, it will have a spiky ear.

Shiny sprites for Spiky-Eared Pichu exist in the coding of the games, although it remains unknown if this special Pichu has the 1 in 8192 chance of being shiny like all other Pokémon encountered in the wild. It is highly likely that the data was only included, as in the case of ???-type Arceus, to prevent the game from crashing if someone was to hack the game, or by default due to every other form difference having both normal and shiny forms despite availability of these Pokémon as shiny.

If taken to Professor Elm, it is revealed that she has traveled through time with Celebi. Elm claims that he and Professor Oak were researching the time travel abilities of Celebi, and claims that this Pichu proves his main theory. He adds that the reason it cannot evolve is because it has been time traveling for so long. He will then call all the Pokémon Center attendants to prevent Spiky-Eared Pichu from being used in trades. 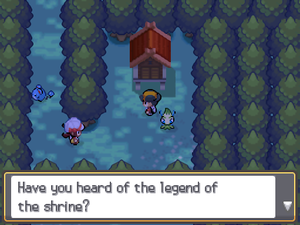 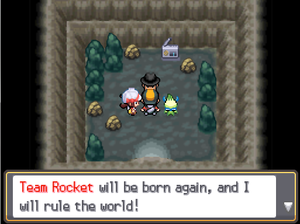 In order to view this event, you must have acquired the special event Celebi during the period it was up for download. Outside of Japan, this download has yet to be released, and can only be viewed by using cheating devices. You must also have obtained all of the badges and have Celebi as your main Pokémon when approaching the shrine.

During this event, you don't have to do any walking around. It's entirely cinematic except for the battle at the end.

After investigating the shrine, your friend walks by and starts to talk to you when Celebi starts to glow. Your friend points out that you're not in the Ilex Forest anymore, and then explains that you must have traveled through time. Nearby, you can see two people fighting, only to realize it to be your rival and the old head of Team Rocket, Giovanni. Celebi warps you through time again, to a closer past. This time, you arrive in a cave with Giovanni when Team Rocket was taking over the broadcast station. Just before Giovanni is about to leave, he challenges you to a battle. Don't worry about Celebi fainting, your friend will revive it after the battle with a Max Revive.

Trade a GameStop Jirachi 2010 (only available in the U.S. from 2/27/10 to 3/13/10 and only available to be uploaded to Diamond, Pearl or Platinum; unknown if this event will happen again or if it has happened since 3/14/10, the day HeartGold and SoulSilver were released in the U.S.) to your HeartGold or SoulSilver to open a new route, Night Sky's Edge.

The Yellow Forest route is available from a Nintendo WiFi Event.