The Pokérus is a special status condition that a Pokémon may get, first appearing in the Generation II games. Unlike other status conditions, it cannot be healed at a Pokémon Center or with any status ailment healing item, and can only be obtained by the Pokémon in question once. When a Pokémon has had the Pokérus, it gains double the effort values from battling (i.e., fighting a Magikarp will give two Speed EVs, rather than one). Effort points gained from vitamins are not doubled. The virus takes about two days to wear off of an infected Pokémon, but the period of time can vary.

When it was introduced, the Pokérus had a 3 in 65,536 chance to be on a wild Pokémon. Through battling or capturing this wild Pokémon, players could get this helpful virus onto their own Pokémon, and subsequently spread it around to others, even eggs. Due to the overwhelmingly low chance of encountering the virus (about 1/3 of the chance to encounter a shiny Pokémon), and the fact that most would not even recognize a Pokémon with the virus and therefore flee from it, however, most players would never have a Pokémon with the virus. 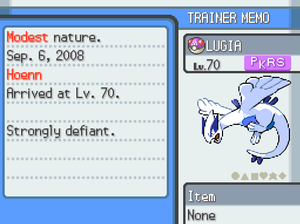 When infected, a Pokémon's status screen will indicate it much as it does any other status condition, as PKRS. When another normal status condition, such as sleep, affects the Pokémon, the Pokérus icon will be replaced. As long as the Pokémon is infected with Pokérus, it can spread the virus to the other Pokémon in the player's party. The infection will spread if the infected Pokémon is in the main party after a battle. An uninfected Pokémon must be next to a Pokémon infected with Pokérus in the main party for the virus to spread. If Pokémon that have already been infected and cured from Pokérus are in the main party and are on either side of a Pokémon currently with the disease, Pokérus will not spread after any amount of battles. Pokémon that are put into the PC will keep the status indefinitely.

When the player first encounters the virus, the nurse at the Pokémon Center will make note of it when the Pokémon is first healed after contracting it, saying that there are "small life forms" on the Pokémon. After leaving the Pokémon Center, Professor Elm will call the player to tell them that the virus has no effect and will wear off. If he is called back, he will claim that Pokémon will grow faster with the Pokérus while infected. 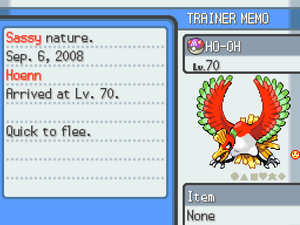 Once a Pokémon's immune system has fought off the virus, they cannot spread it further, nor can it be spread to them by other Pokémon. In Generations II and III, a dot will appear on the Pokémon's status screen to indicate that they have had the virus previously, while in Generation IV, it will be a small smiley face. Though the virus is gone, its positive effects will remain, most specifically the ability for that Pokémon to gain double EVs.

Any Pokémon on the player's party at the moment the system clock reaches midnight after a certain number of days in that position will become immune. An easy way to keep a "vessel" for future spreading is to always send the infected Pokémon to the PC, before midnight. The game also recognizes immunizing if the system is turned off and on again on the next day.

Despite being called a virus, the Pokérus' relationship to its host is more symbiotic as it helps its host instead of harming it.