Similar to Route 1 in Kanto, Trainers traveling from Cherrygrove to New Bark can hop over a series of ledges to avoid the grassy areas and to travel between the two areas quickly while Trainers traveling from New Bark to Cherrygrove must travel through a series of grass patches to reach their destination. The first such patch is near the start of the route where the path turns south into the patch to circumvent a ledge. Route 29 westbound continues to follow the ledge south, then to the west before the route opens up at a T-intersection. To the west, Trainers whose Pokémon can use Cut outside of battle can chop down a tree to open a grass-less path to Cherrygrove. Those who do not have Cut, however, must go north through a break in the ledge.

In this location on Tuesdays after Falkner, the Violet City Gym Leader, has been defeated, Tuscany, one of the Week Siblings, appears, giving any Trainers that talk with her a TwistedSpoon the first time the player meets her, and a Shock Ribbon the second time and afterwards. Immediately north of Tuscany, there is another tree that can be cut to avoid two grass patches to the northeast. However, Trainers lacking Cut are forced to traverse either of the two patches. Regardless of which way a Trainer takes, the route curves to the west, merging with the second Cut shortcut path directly south of a guardhouse which separates Route 29 from Route 46 in the north.

East of the guard house, the path heads to the northwest, then to the southeast, passing through another grassy area before straightening out and traveling due west. The route then juts south, merging with the first Cut shortcut path as it turns to the west, then north and west again as it enters Cherrygrove.

Route 29 is in a mountainous region of Johto, which means that the Headbutt-able trees that line the route hold Pokémon often found in the mountains, namely Spearow and Aipom. The route is also home to the Lyra or Ethan (depending on the player character's chosen gender), who teaches players how to capture Pokémon

To get to Mr. Pokémon and complete your errand, first head west out of New Bark Town. Take the long way through Route #29 (through the grass near the center of the map), pass through Cherrygrove City, and take a short walk north to Mr. Pokémon's home on Route 30. But with only one Pokémon to protect you, it won't be an easy journey.

You can only be attacked in overworld Routes when crossing through the tall green grass. Unfortunately, there's a lot of that grass between New Bark Town and Cherrygrove City, so run from strong opponents when you're weak and use Berries and Potions to heal when necessary. If your Pokémon gets hurt too badly, return to New Bark Town and heal at Professor Elm's lab.

There's a wide variety of Pokémon on Route 29, and you'll note that the Pokémon you encounter change based on the time of day. But without any Poké Balls to capture them in, your only choices are to fight or run. 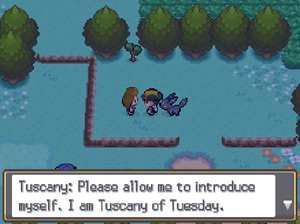 Only available on Tuesdays after Falkner is beaten

There are seven siblings who are located at various points in Johto. After you defeat Violet City's Gym leader, they will appear. On the ledge in the very center of the route (above the white path leading north), you'll find the first of seven siblings who each appear at one spot on Johto, on one specific day of the week. Tuscany, the Tuesday sibling, appears on Route 29 every Tuesday. It can be a pain to remember to come back, but it's worth it: Tuscany of Tuesday will give you the TwistedSpoon, an item that powers up all of one Pokémon's Psychic-type attacks when held, when you find her.

This is where you first truly notice the games difference between night and day. Not only does it get dark out, but certain Pokémon will only appear at night, and others will only appear during the day. On this Route, Pidgey and Sentret will only roam around during the day, while Hoothoot will make an appearance during the night. Also, if you come back later in the game with the radio card, you can use Hoenn and Sinnoh sound to capture Pokémon from other regions that would otherwise be unobtainable.